Along many of the roads we travel are historical markers. I have an app called Field Trip which buzzes when we pass these markers and tells me what is on them. When we are out West my phone buzzes occasionally. Driving these roads of Spotsylvania County my poor phone never quits going off.

One of the most interesting to me was one about John Wilkes Booth. After he assassinated Lincoln he escaped D. C. and headed south into Virginia. At this spot on Highway 301 near Port Royal, Booth was cornered by Union soldiers and killed on April 26, 1865.

There is so much history and to be able to stand where it all happened makes it real for me. In high school History was just a subject I had to take to graduate. I have a whole different attitude now.

Just picture Union soldiers marching down this road (which has been improved since 1863) shoulder to shoulder, so many of them that messengers couldn’t get through to the front of the line. 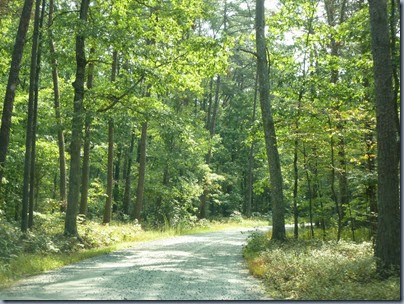 Another Field Trip we made was to the Chancellorsville Battlefield. It was here that Robert E. Lee won his greatest victory, but lost his legendary subordinate, Stonewall Jackson.

On May 2, 1863, Stonewall Jackson marched 12 miles around the Union army and destroyed Gen. Joseph Hooker’s right wing in a surprise attack. In the confusion of the darkness, Jackson was accidently shot by his own troops. The surgeons removed his arm and wanted to get him to the hospital in Richmond.

They took him by “ambulance” (a horse drawn wagon) 27 miles to the Thomas C. Chandler’s plantation. They planned to evacuate him to Richmond by railroad, however, the Union had cut the rail line. Once Confederate troops regained control of the rail line, Jackson would board a train at Guinea Station and go on to Richmond. 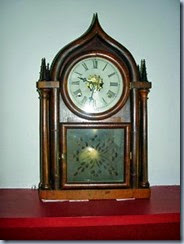 This clock was put in Jackson’s room by the Chandlers to make the room look more homelike and cheerful. They wind it twice a week and it still keeps perfect time.

Three days after being wounded, Jackson came down with pneumonia. Despite the efforts of five doctors, Jackson was told on May 10, 1863 that he was going to die. His last words were: “It is the Lord’s Day; my wish is fulfilled,” I have always desired to die on Sunday.”

This is the actual bed where Stonewall Jackson died. 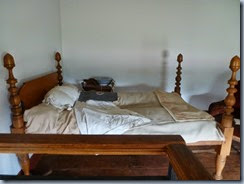 The only building left of this plantation is the office building where Jackson died. It is now called the Stonewall Jackson Shrine. 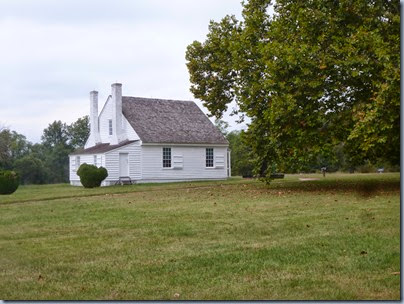 Jackson is buried in Lexington but his arm was buried back in Chancellorsville where it was removed.