For those of you who don’t know our background, Jim was born and raised here in Virginia. I moved to Virginia in 1980 when I took a position at IRS headquarters in Washington, D.C. I met Jim in 1985 at Hunter’s Lodge when he asked me to dance. (Hunter’s Lodge was torn down but we were there for the very last night they were open.)

I wanted to see where Jim lived about 35 years ago so we set off to find his old home place. Things can really change in 35 years especially in this area. So many new subdivisions have been built and it took us awhile to find our way.

We finally found Todd’s Tavern Market. During the 1781 campaign of the Revolutionary War, the Marquis de Lafayette, camped just west of here on June 2. Lafayette, only 23 at the time, was moving north with 3,000 Continental soldiers and militia. No Revolutionary battles were actually fought in this area but the troops traveled through this area. 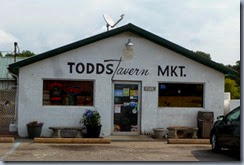 However there was a Civil War battle fought at this point. On May 4, 1864, Lieutenant General Ulysses S. Grant led Union Army troops across the Rapidan River into the Wilderness. Robert E. Lee attacked Grant’s troops and in two days of heavy fighting Grant had both flanks turned and took more than 17,000 casualties. Rather than retreat, he issued orders on May 7 for a night march to Spotsylvania Court House, the next stop on the road to Richmond. To get there, his cavalry would first have to clear Confederate cavalry from the Brock Road at Todd’s Tavern.

Got a little off track there but Jim was familiar with Todd’s Tavern Market and we were able to find our way to his old home. Sometimes it is really hard to see the changes that have happened to places in our memories and this was one for which the changes were not good.

The land is completely overgrown with bushes and trees where Jim used to have a nice lawn. The pond where he and the boys would go fishing can no longer be seen because of the weeds and bushes. 37 years makes a big difference. This is the front “yard.” 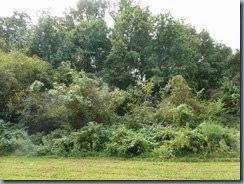 The house is in terrible shape and really should be torn down. We knocked on the door to ask permission before taking any pictures and were greeted by a women who told us she would have to ask her Mom for permission. Her mother finally came to the door. I would say she was in her 80’s and was definitely taken back by us standing on her broken down porch. After we visited with her for awhile and explained that Jim used to live there she began to relax and we found that her husband has been in the hospital for 8 months and that it was really hard for her to take care of herself and her daughter. We stayed for several minutes visiting on the porch and I was able to take a couple of pictures. 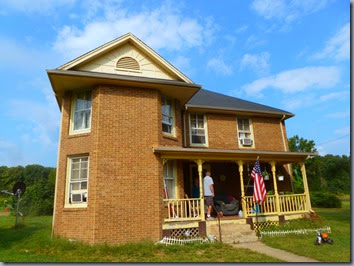 This guy was not happy we were anywhere near his yard. He barked, growled, and lunged the whole time we were there. Sure was glad he was chained up. 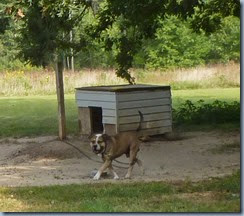 Jim and I did get a chance to talk about some of Jim’s memories of living in this area which was fun for me.