The wind died down Thursday night and we headed out Friday morning. Our original plan was to spend the night in Mitchell but that was before I found out that Nan and John were in Sioux Falls. We pressed on and ended up at the fairgrounds in Sioux Falls parked next to our good friends. 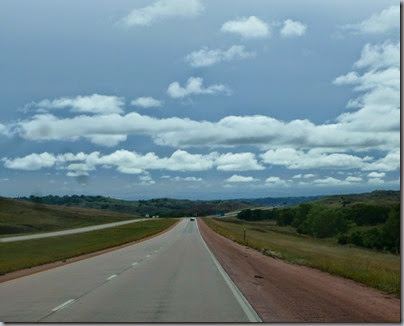 We went to the Pizza Ranch for dinner. It’s a buffet type of place with all kinds of pizza, a salad bar and some of the best fried chicken we have ever had. They also had a couple of dessert pizzas which were fantastic. Jim even shared his root beer float with me. We tried to figure out how to stay another four hours so we would have room to eat some more, but finally gave up and went back to the rigs. Let the girls out and then went over to their rig and we played Phase 10 and laughed. Hard to say goodbye but we’ll see them again in Q in January.

Have no idea what this is but it was along the road in SD. 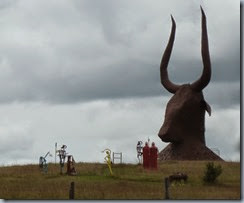 We planned on stopping at a County park in Webster City, IA. No way. We pulled in and the place was packed with rigs parked every which way and hundreds of kids running wild. We turned around and headed on down the road. Finally ended up in Story City, IA at the Whispering Oaks Campground. It’s an okay place, lots of noisy trucks that go in and out constantly. Not sure why. They must have had a storm go through because there were only three sites open when we got here and two of them were all mud.

The girls are being so good. 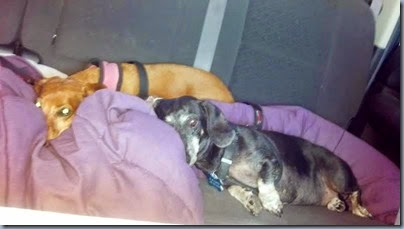 Moving on in the morning to Geneseo, IL. I really do miss the desert. I know lots of you folks like trees and grass but I’m just not one of those. One of my problems is mosquitoes and every other bug just love me. My legs are covered with bug bites (even after using bug spray) and I spend most of every night awake scratching until I bleed.