I have just plain run out of time to do much blog reading. I’m really working hard just to get some of my bog posts done before I collapse each night. It will probably be this way until we leave Virginia and things calm down just a bit.

Hugh Mercer (January 17, 1726 – January 12, 1777) was a soldier and physician. He became a brigadier general in the Continental Army and a close friend to George Washington.  Mercer died as a result of his wounds received at the Battle of Princeton. 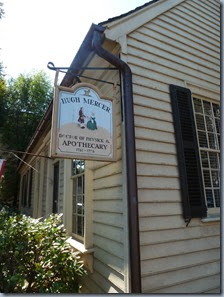 When Dr. Mercer wasn’t fighting in the Revolutionary War he was a physician in the town of Fredericksburg. His office is now a museum and we took the tour. My maiden name is Mercer and that side of my family came from Scotland. Dr. Mercer escaped from Scotland after the Battle of Culloden. So I figure somewhere along the line, way back when, we are probably related.

They don’t allow pictures so this one of the inside is from the website. 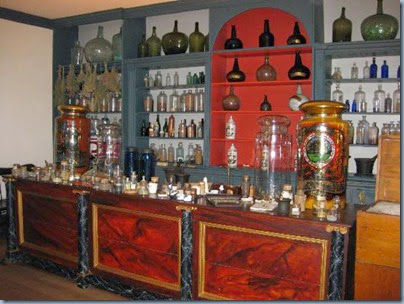 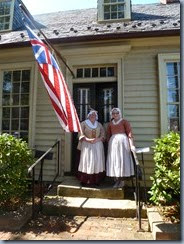 What an interesting look into the life of a physician as well as his pharmacy. The docents are in costume and explain what a doctor had to do to treat his patients. They demonstrated some of the common instruments a doctor would use. The younger docent showed us the leeches that were used for blood letting. (Yes, they were alive and she handled them.) But after seeing the other instruments they used for blood letting, the leeches may have been the best way to go.

They also gave a very knowledgeable presentation on the uses of all the herbs that the doctor would have prescribed.

We really enjoyed this tour.