The restaurant was originally opened in 1960 on Route 66. In the mid-1960’s signs began cropping up along Route 66 inviting travelers to come in for a 72 oz steak dinner that was FREE if it could be eaten in one hour. 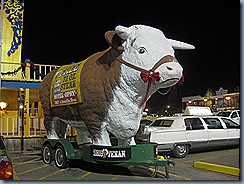 In the early 1970’s, I-40 was built replacing Rte 66 as the major traffic lane. The owner built a new restaurant along I-40 and the giant cowboy out front was moved by helicopter from the old place to the new. 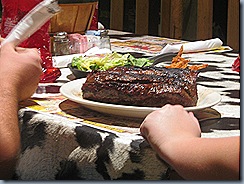 to see if he was able to eat it all in one hour. The meal consists of the 72 oz steak, three shrimp, one dinner roll, one baked potato, and one salad. If you don’t succeed in eating the meal in one hour it will cost you $72.00. Needless to say, Jim and I passed on this one. 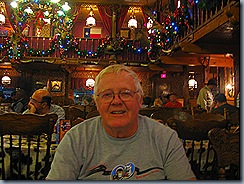 However, our sirloins were marvelous and I would definitely eat there again. (I wasn’t real excited about all the Christmas decorations but they seem to be everywhere.)