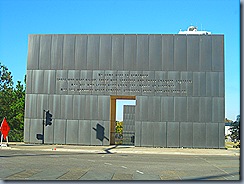 This memorial honors the victims, survivors, rescuers, and all who were changed forever on April 19, 1995. It encompasses the sacred soil where the Alfred P. Murrah Federal Building once stood. 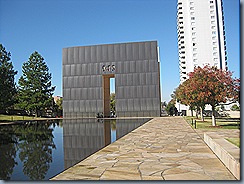 The Gates of Time: Monumental twin bronze gates frame the moment of destruction - 9:02 - and mark the formal entrances to the Outdoor Memorial. 9:01, found on the eastern gate, represents the last moments of peace, while its opposite on the western gate, 9:03, represents the first moments of recovery. Both time stamps are inscribed on the interior of the monument, facing each other and the Reflecting Pool. 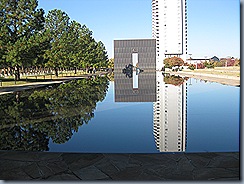 Reflecting Pool: A thin layer of water flowing over polished black granite, the Reflecting Pool runs east to west down the center of the Memorial on what was once Fifth Street. Visitors who see their reflection in the reflecting pool are supposed to see "a face of a person changed by domestic terrorism." 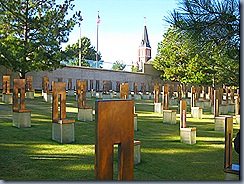 Field of Empty Chairs: 168 empty chairs hand-crafted from glass, bronze, and stone represent those who lost their lives in the tragedy. A bombing victim's name is etched in the glass base of each chair. The chairs represent the empty chairs at the dinner tables of the victims' families. The chairs are arranged in nine rows symbolizing the nine floors of the building, and each person's chair is on the row (or the floor) on which the person worked or was visiting when the bomb went off. The chairs are also grouped according to the blast pattern, with the most chairs nearest the most heavily damaged portion of the building. The westernmost column of five chairs represents the five people who died but were not in the Murrah Building when the bomb went off (two in the Water Resources Board building, one in the Athenian Building, one outside near the building, and one rescuer). The 19 smaller chairs represent the children killed in the bombing. Three unborn children died along with their mothers, and they are listed on their mothers' chairs beneath their mothers' names. 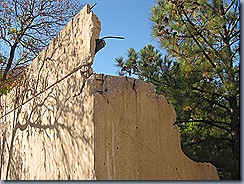 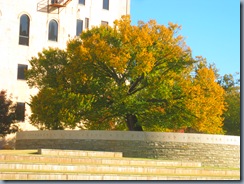 The Survivor Tree: An American Elm on the north side of the Memorial, this tree was the only shade tree in the parking lot across the street from the Murrah Building, and commuters came in to work early to get one of the shady parking spots provided by its branches. Photos of Oklahoma City taken around the time of statehood (1907) show this tree, meaning it is currently at least 103 years old. Despite its age, the tree was neglected and taken for granted prior to the blast. Heavily damaged by the bomb, the Tree ultimately survived after nearly being chopped down during the initial investigation, in order to recover evidence hanging in its branches and embedded in its bark. The force of the blast ripped most of the branches from the Survivor Tree, glass and debris were embedded in its trunk and fire from the cars parked beneath it blackened what was left of the tree. Most thought the tree could not survive. However, almost a year after the bombing, family members, survivors and rescue workers gathered for a memorial ceremony under the tree noticed it was beginning to bloom again. The Survivor Tree now thrives, in no small part because the specifications for the Outdoor Memorial design included a mandate to feature and protect the Tree. One example of the dramatic measures taken to save the Tree: one of the roots that would have been cut by the wall surrounding the Tree was placed inside a large pipe, so it could reach the soil beyond the wall without being damaged. A second example is the decking around the Tree, which is raised several feet to make an underground crawlspace; workers enter through a secure hatchway and monitor the health of the Tree and maintain its very deep roots.