Steve and Carol included their beautiful state capitol building in our tour of Oklahoma City. (Still no traffic) 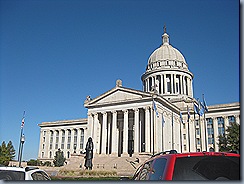 state capitol campus is famous for its oil wells and remains the only state capitol grounds in the United States with active oil rigs. The capitol building sits directly on top of the Oklahoma Oil Field, which explains why there is an oil derrick in front of it.

On top of the dome is a 17-foot tall bronze Native American statue, titled the Guardian, as a celebration of Oklahoma's Native American heritage. Enoch Kelly Haney, a OK State Senator and Chief, of the Seminole Nation of OK, created the statue. 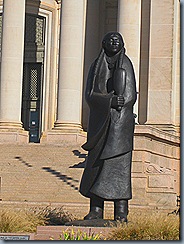