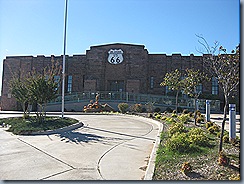 Chandler, OK – Jim and I drove up to Chandler to go through their Route 66 museum which is mostly an video show of sights that used to exist on Route 66. The museum is in the old armory and they also have a Hall of Fame for their veterans. 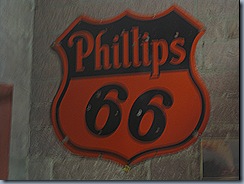 Phillips 66 gasoline began in 1917 as Phillips Petroleum Co. In 1927, the company’s gasoline was being tested on US Highway 66 in Oklahoma and when it turned out that the car was going 66 mph, the company decided to name the new fuel Phillips 66. 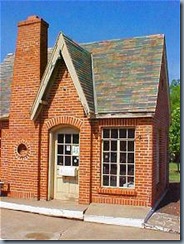 This building in Chandler was a cottage style “B” type Phillips 66 station built in the late 1920’s. 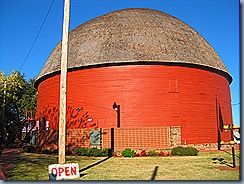 In the spring of 1898 William Harrison Odor, members of his family and his neighbors starting building a unique structure in the green countryside of Oklahoma. Little did they know at the time that the barn they were building would become a landmark on one of the most celebrated highways in America. 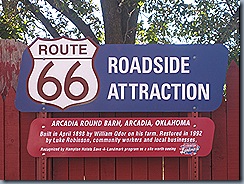 This was the beginning of what would become know as Arcadia’s Round Barn. When the barn was new the lower level was used to shelter cattle, mules and hay. The upper level or loft was used for barn dances and other social gatherings.