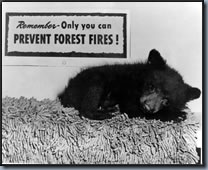 Capitan, NM – In 1944 the Forest Service originated the use of a poster depicting Smokey Bear. We were really close to his burial site so we decided to visit Smokey.

On May 4, 1950, a carelessly discarded cigarette started the Los Tablos blaze in the Lincoln National Forest near Capitan, NM. ON May 6, a second fire, known as the Capitan Gap fire started in the same general area. Together these fires destroyed 17,000 acres. On May 8, a 70 mph wind made it impossible to control the blaze. It was on this day that nineteen men were trapped in a rock slide where the fire burned around them. They were rescued without any fatalities, but later expressed the opinion that they knew “just how a slice of toast feels”. 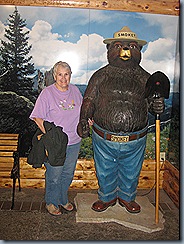 On May 9, a fire crew brought in a badly singed bear cub. They had found the cub clinging to the side of a burnt pine tree. Badly burned about the buttocks and feet, he was given the name “Hotfoot”. His name was soon changed to Smokey Bear. 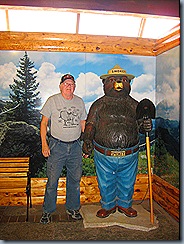 In 1952 Congress passed a bill into law governing the commercialization of the name and image of Smokey Bear. Due to the vast amount of mail he received, Smokey was given his own zip code.

Once Smokey recovered from his burns, he was moved to the National Zoo where he served his country for 25 years. That is equal to 70 human years and at that time was the mandatory retirement age of all Federal employees. 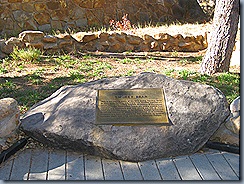 Smokey died in 1976 and was returned to Capitan to be buried near the mountains where he was found.