Lincoln, NM – The story of Lincoln has the dubious distinction of having been the most violent town in western American History. President Rutherford B. Hayes once called the single road through Lincoln, “the most dangerous street in America.”

Here is a tale fueled by ambition, greed, corruption and violence, dripping in political intrigue, which spilled over to the state capital in Santa Fe.

Although Billy the Kid was the most famous character in Lincoln, he had only a minor role in the larger story of the Lincoln County War. The War actually started in 1877 when John Tunstall decided to establish a mercantile store in Lincoln to compete with L. G. Murphy and Company who also had a store in Lincoln and also have government contracts at Fort Stanton. 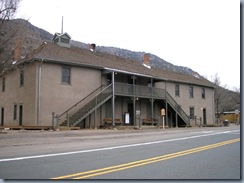 Murphy built a two story building known as The House which not only included a store, but a bar, a Masonic lodge and living quarters. Murphy lost out on a beef contract and the money began to run dry. One of Murphy’s partners died and Murphy’s lawyer, Alexander McSween, was sent to New York to collect the $10,000 in life insurance. On the way back to Lincoln he met Tunstall and together they devised a scheme to open a competing establishment based on McSween’s inside information of Murphy’s business.

In October 1877, a young man named William H. Bonney rode into town and went to work for Tunstall on his ranch. William soon became known as Billy the Kid. 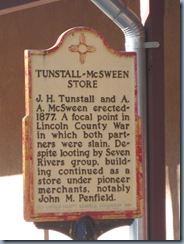 McSween was accused of embezzlement and on February 18, 1878, Tunstall was murdered by a posse formed by Dolan (a partner of Murphy). The town became split with the Dolan guys being called “The Boys” and Tunstall’s guys called “The Regulators”. The Regulators included Billy the Kid.

There were killing on both sides including the assassination of Sheriff Brady and his deputy by The Regulators. In July of 1878 the feud came to a climax when a five day gun battle was fought. On the last day of the battle it is estimated that 2,000 shots were fired.

For the next six months, outlaw bands over ran the county, murdering and pillaging. Of all the murders, thefts, property destruction and rapes during the Lincoln County War, only one man, Billy the Kid, was ever tried, convicted and sentenced. This was for the murder of Sheriff Brady. Billy the Kid was to hang in Lincoln on May 13, 1881 but made his famous escape from the courthouse, killing his two guards, on April 28, 1881.