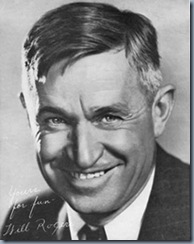 Claremore, OK - Will Rogers was born on election day in 1879, in a small town called Oologah in the Cherokee Nation, OK. He was taught by a freed slave how to use a lasso and as he grew older, his roping skills landed him in the Guinness Book of Records for throwing three lassos at once: one rope caught the running horse’s neck, the other would hoop around the rider and the third swooped up under the horse to loop all four legs.

He was born restless. In 1898 he left school to work as a cowboy in Texas. Before he was 20, he’d traveled around the globe. He later joined the circus performing his rope tricks. His act quickly became a hit and before long he was back in Chicago, appearing on the vaudeville stage. 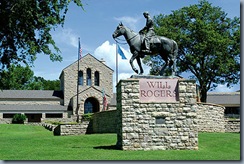 In 1908 he married Betty Blake. By 1916 he was appearing nightly with the Ziegfeld Follies. By 1918 he’d starred in the first of seventy movies. And by 1919 he’d published two books.

He made us laugh at ourselves. He entertained royalty and common man alike. He joked about the politicians and patriarchs of his day. He was good natured, gentle and wise beyond his years.

In 1922 he began a syndicated newspaper column which continued for the rest of his life. He once said, “I’ve joked about every prominent man of my time, but I never met a man I didn’t like.” 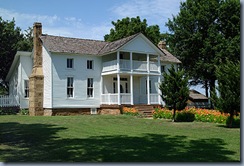 He served as mayor of Beverly Hills. In 1935 he flew to Alaska with friend and famed aviator, Wiley Post – it would be their last flight. His death was mourned by the entire world.

He was a down-to-earth, gum-chewin’ philosopher who was loved and respected by almost everyone.

He was Will Rogers – a caring member of the human race, an American, a Cherokee Indian, a cowboy, a philosopher and a legend.

“Live your life so that whenever you lose, you’re ahead.”

“If you live life right, death is a joke as far as fear is concerned.”