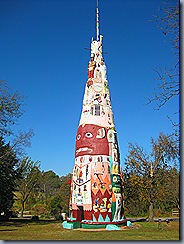 Ed Galloway (1880-1962) was born in Missouri, fought in the Spanish-American War, and was on his way with his family to California when he took a temporary job in Foyil. 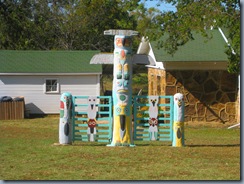 Working mostly by himself, Galloway started the Totem Pole in 1937 and finished in 1948. Though sometimes credited as a monument to Native American tribes, Galloway said he built it after he retired so he would simply have something to do. He thought it would be a good thing for youngsters, Boy Scouts in particular, to visit. 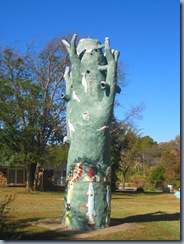 The totem pole is sixty feet tall and 30 feet in circumference. Ed's wife once taunted him with her own variation of Joyce Kilmer's poem Trees: "Totem poles are made by fools like thee, but only God can make a tree." Galloway promptly crafted a 12-ft. concrete tree trunk, with holes for birds to live in. 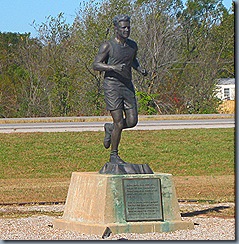 Footrace of 1928. Back then, the idea of a 3,400 mile race from Los Angeles to New York City was novel. Some 2,400 miles of the route was along then new Route 66, the highway that connected the nation.

The event was concocted by the Route 66 Association and a slick promoter, Charles C. Pyle. Known as the "P.T. Barnum of professional sports," Many reporters didn't take the competition seriously, and dubbed it the "Bunion Race."

That didn't stop a 20-year old from Oklahoma, Cherokee Indian Andy Payne, from signing up -- he wanted the $25,000 first prize to save his family's farm and marry his girlfriend. And besides, the guy loved to run.

On March 4, 1928, over 275 runners began the grueling odyssey; by the third day over half had dropped out. The race continued through desert heat and torrential rains. Runners succumbed along the way to injuries, exhaustion, and one was even hit by a car that sped away. Andy Payne emerged as a contender against a Brit, Peter Gavuzzi, trading the lead back and forth for five weeks until Gavuzzi dropped out in Ohio complaining of a "bad tooth."

As a final indignity, Pyle made the runners circle around Madison Square Garden for 20 miles before crossing the finish line. The Transcontinental Footrace of 1928 had covered 3,423.5 miles.

Payne set a world record by completing the distance in 573 hours, 4 minutes, 34 seconds -- he averaged 6 miles an hour. He got his $25,000 dollars, returned to Oklahoma, and married his sweetheart. 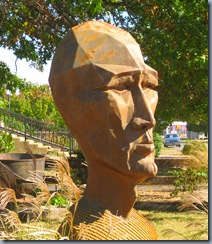 I have no idea what the story is behind this head. It was in somebody’s yard and I just had to include it.