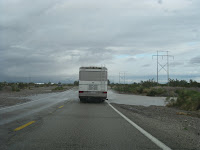 We decided we needed to make a grocery run this morning before the storm really got bad. It rained most of the night but not much wind. Where we're parked we didn't have too many big puddles but going into town was a different matter. The washes were all full and running over the road in some places. Not very deep as you can see with this motorhome going through it.

The wind really started to pick up while we were in town so they decided to close down the Big Tent and send everybody home. We got caught in the traffic and it took us quite awhile to get back home. 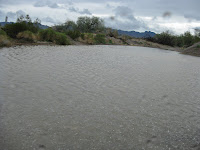 But we got back just in time. Pulled in all our slides, put down the antenna and the storm hit. And what a storm it's been. I have no idea how hard the wind was gusting but there were times when I wasn't sure we were going to survive without being pushed over. The rain was coming at us sideways and there were tornado warnings. Such a lot of fun.

We had a small break in the storm about 5:30 and everyone came out of their rigs to check on everybody else. Freddy and Delcie went to Yuma today and we weren't sure if they were going to make it back but they finally did. We only stayed out a few minutes because it was cold and the wind started back in again. Now we're all waiting for tomorrow to come and maybe the worst will be over.

And who's bright idea was it to come to Quartzsite for graduation? Certainly, not mine.
Posted by Jim and Sandie at 8:36 PM