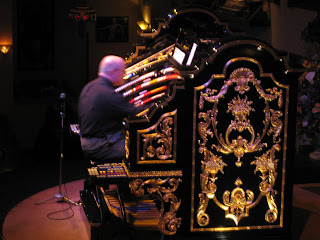 Before we came to Quartzsite we went to dinner at Organ Stop Pizza. Heads up everybody - this is a definite MUST DO. In fact, it is a definite redo for us. It is located in Mesa, AZ on Southern Avenue. We went with my sister, Judy, her husband, Don, and our friend Paul. (Don is not asleep - just enjoying the music.) 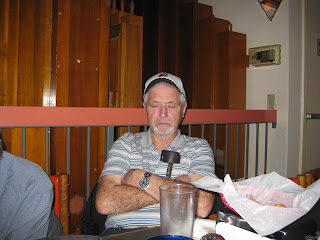 Sounds like just an another pizza joint from the name but the only thing pizza joint about it is that they serve pizza. The main attraction is a Wurlitzer Organ. And not just any organ - the largest Wurlitzer in the world. 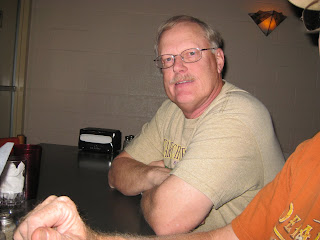 This is a theatre pipe organ which is very different from a chuch organ. The theatre organ sounds like an entire orchestra with theatrical sound effects. During the late teens and early twenties, all movie theatres installed theatre pipe organs for use with silent films. This Wurlitzer was built for the Denver Theatre and was installed in 1927. However, with the advent of the talking picture show and the great depression, organs were no longer used and a fire caused extensive damage to the organ's relay. 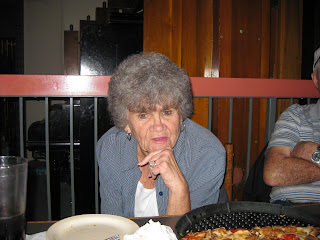 Organ Stop purchased the organ in the early 1970's and took on the task of rebuilding it. It was then installed in their original location in 1975. Several additions have been made to the organ over the years and it now has nearly 6,000 pipes with the wind required for its operation provided by four huge turbine blowers. 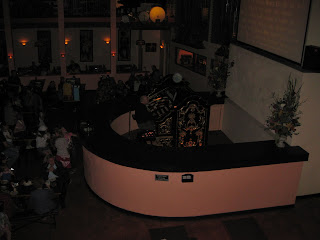 The current location was built expressly for the enjoyment of those of us who come to eat and listen. The organ is installed in four chambers at one end of the restaurant with a 43 foot ceiling to provide unbelievable acoustics.
The organists are amazing. How anyone can learn to play an organ this huge and can multitask with their hands and feet going in opposite directions at all times is just beyond my comprehension.
And speaking of food - the pizza is pretty good. The spaghetti was horrible (I don't eat pizza because I don't eat cheese). So next time I'll just get a salad.
Posted by Jim and Sandie at 7:10 AM