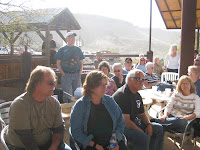 Several of the class wanted to visit the Desert Bar which is north of Parker. I didn't feel like going to I sent Jim off by himself with the rest of the group. I think they really had a good time and Jim said the band was great. I think the Desert Bar is one of those things that everybody needs to do at least once so it's still on my list of to-dos. 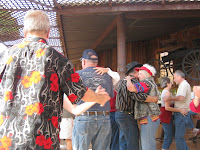 The "Nellie E Saloon" (DESERT BAR) is situated in the Buckskin Mountains, in Parker, Arizona, on land that was an old mining camp. The name "Nellie E" originates from the old mining claim. They used to mine copper and then take it to the smelter and get gold. 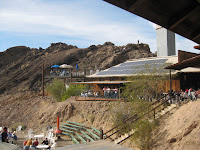 When Ken opened the bar, he hauled water in a 50-gallon tank loaded on the back of his truck. Then he purchased an old fire truck, which he used to haul water. In the summer of 1997, Ken drilled a new well on the north side of the saloon that operates on solar power, with the pump set at 360 feet. The "Nellie E" was completed in 1988. 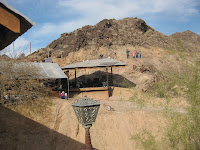 The inside of the saloon is unique in many ways. It has windows that are old glass refrigerator doors, the bar stools are made of steel and they sway from side to side. The top of the bar is brass and the ceiling is made of stamped tin purchased from a factory in Missouri. The saloon is powered by solar energy and is stored in batteries and run through inverters. 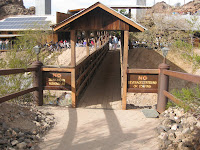 Built in 1981, the covered walk bridge was the next big project. The church is made of solid steel and the walls and ceiling are made of the same stamped tin used inside the bar and the roof is made of copper. 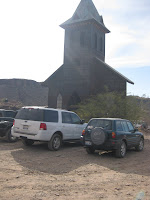 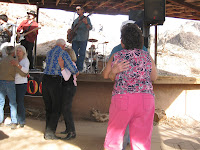