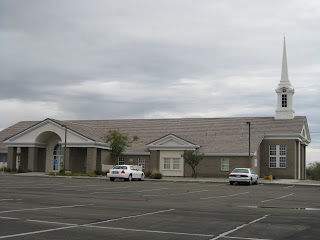 Jim & I went to church at the Quartzsite Branch yesterday. The number in attendance will give you some idea of hos this place changes during the winter months. There were at least 475 people at church yesterday morning. That is definitely a huge amount and the entire chapel and overflow area were packed. Then I found out they have a second session in the afternoon and they expected almost that many people again. Those are January figures. In the summertime they have 40 people. So from almost 1000 people in January to 40 in July. That sums up Quartzsite.

There were a couple of really exciting things that happened yesterday. First of all a baby was blessed. Something like that doesn't happn very oten in this Branch because of the 1000 people there very, very, very few are under the age of 50. It was like looking over a sea of gray hair.

There was one empty seat beside me and this lady sat down. We started to visit and I found out that she lived in Kalispell. I told her we used to live in Lakeside. Her son used to live in Lakeside. Guess what - we lived there at the same time. Her son, Alan, also lived for a time in Sidney, MT and knew my parents there. Small, small world. Then she pointed out another lady who was from Lakeside. Jean Remington.

We also knew Jean and Harley when we lived in Lakeside. In fact her grandson and Todd were baptized on the same day. We also found out that she had served a mission in Sidney and she taught my Dad the gospel. We followed her home but Harley is very sick so we just visited with Jean for a couple of minutes outside. What a fun experience.
Posted by Jim and Sandie at 10:15 AM