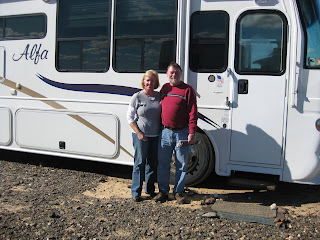 The Quiet Ones - Meet Jerry and Janice. They started out as part of the Class of 2008 but as with many people the economy put their dreams on hold until the latter part of 2009. So the 2008'ers loss is our gain. They were really ambitious and spent a lot of their time our exploring the area around Quartzsite. At the campfires, they didn't get much of a chance to say anything but they are going to the Salton Sea with us and I hope to get to know them better. 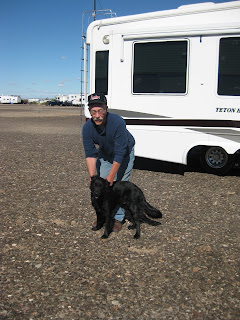 Dave and Millie the Mooch. Our very own River Rat. At least that's what he told me. Dave stayed even further out in the boonies than the rest of us. He wanted to be able to let Millie off leash some of the time and out there nobody would care. Millie is an absolute doll. He saved her from a kill center and I think he really got a great deal. He'd drop by and see us and he'd go to dinner with us. He especially liked going to dinner since he said he got tired of his own cooking. He's going to stay in Q until April so I'm sure hoping we get to meet up with him again real soon.
Posted by Jim and Sandie at 9:20 PM