Today was supposed to be Blue Grass day in Blythe, CA. But as per usual, things happen and we didn't make it to the concert.
The day started with the departure of two of our group. Boondocking was just not for them and there weren't any sites available in the rv parks in town. They headed over to San Diego and said they'll be back to spend a few more days with us on their way back. So let me introduce you to them. 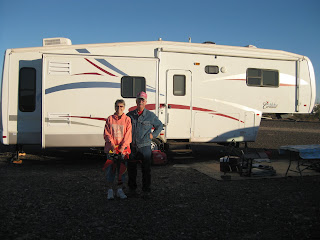 The first couple is Jan & Bill. We originally met them at the Samboree in Casa Grande in March 2009. We have met up with them several times in our travels and have had a chance to get to know them and like them more each time. However, they are not technically full timers because they still own a house in Casa Grande, AZ and spend some of the winter in that house. Most of the time they are on the road and so we have adopted them as part of the Class of 2009. Bill is a western history enthusiast. So they spend a lot of their time on the road following the paths of Teddy Roosevelt, Billy the Kid, the Earps, and others.

Sherry & Dave are brand new rvers. Sherry and Jan are sisters but Sherry & Dave have a home in Minnesota and are not yet full timers. They just bought their first rv in December and headed out in the cold of winter trying to get south. All of their canned food froze and they had no hot water the entire way. But they hung in there and finally got down to the land of the sun. 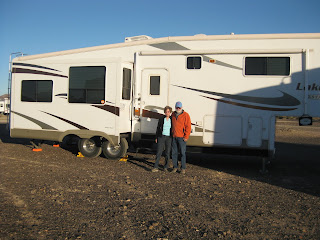 After we sent them on their way, Ed came over to ask if Jim could help him with his tire pressure monitor. 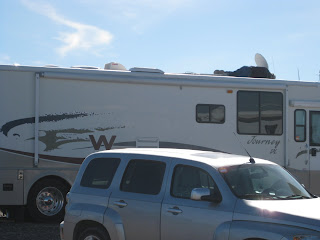 He had just purchased a Pressure Pro and needed to get all the sensors set up. What I want to know - if they were working on sensors on the tires, why was Ed on the roof of the rv?
After the sensors were figured out, Jim talked to a guy about selling his porta-bote. I finally drug him into town to do some tourist things with me. Those will be the next couple of posts.
I will also be posting more pictures and a short note about the rest of our class that is here.
Posted by Jim and Sandie at 9:58 PM