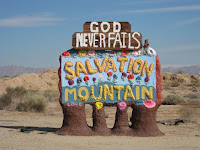 Salvation Mountain is a colorful art work covering much of a small hill near Slab City, CA. It is made from adobe, straw, and thousands of gallons of paint. It was created by Leonard Knight as a tribute to God and his gift to the world and to convey the powerful message that "God Loves Everyone." 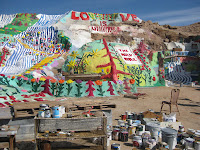 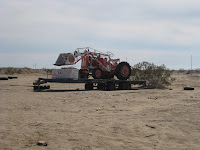 Salvation Mountain must be seen to be fully appreciated. Its 50 foot height and 150 foot breadth is made totally of local adobe clay and donated paint and is truly unique. From its Sea of Galilee at the bottom, to the big red heart in the middle, to the cross at the very top, the reoccurring theme of "Love" is everywhere at Salvation Mountain. 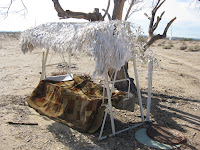 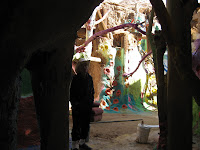 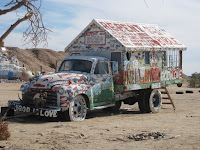 Leonard lives full time at the site in a small cabin mounted on the rear of a 1930's vintage Chevrolet two ton truck. Just like the mountain, the truck and other machinery are completely covered in biblical verses declaring God's love. 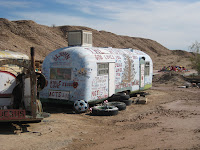 Leonard was born November 1, 1931 in Vermont. He served in the army during the Korean War and returned to Vermont after the war. In 1967 Leonard was in San Diego visiting his sister who was always talking about the Lord. One morning, to escape her sermonizing, Leonard went out and say in his van. To this day he really doesn't know why, but he started repeating the Sinner's Prayer. It was on that day at the age of 35 that he accepted Jesus into his heart and he hasn't been the same since. His passion has been unwavering. His dedication is intense. 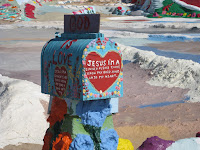 Back in Vermont he tried to make people understand how simple he thought God's love was. But no one would listen to him. Then in 1970 a hot air balloon passed over and Leonard decided that a hot air balloon would be the perfect way to get people to see the Sinner's prayer. For the next 10 years he prayed for a hot air balloon. 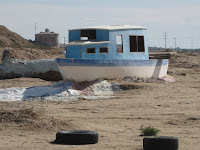 He then decided that he would have to make one himself. He was given a second hand sewin machine and he sewed for years buying fabric when he could. However, over time, the balloon became much too big to manage and after endless attempts to inflate it, the fabric and stitching because to rot. 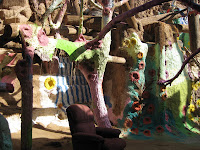 In 1984 Leonard found work in Quartzsite, AZ. One week-end he taveled out to the Southern California desert to Niland and Slab City. Leonard fell in love with the area because it was so warm and he moved there with his van, balloon, and home-built inflating furnance. But he still could not get his balloon in the air. Finally, he had to admit defeat. He felt like a failure. After 14 years of trying to promote his undying love for God, all he had to show for his efforts was an endless sea of rotted-out fabric. With this failure, Leonard decided to leave this area but before he left he decided to make a "small statement". With a half a bag of cement he fashioned a small monument. Days turned into weeks and weeks into years and each day he would put a little more cement and a little more paint on the side of a forgotten riverbank. 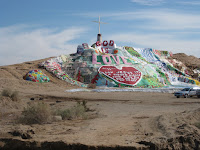 One day after about four years of work, with the instability of all of that sand undermining it's structure, the mountain fell down into a heap of rubble. Instead of being discouraged, Leonard thanked the Lord for showing him that the mountain wasn't safe. He vowed to start once again and to "do it with more smarts." 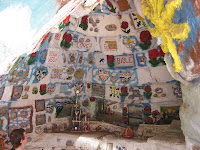 Leonard had been experimenting with the native adobe clay and had been using it on other parts of the mountain. Over the next several years, he rebuilt his mountain using adobe mixed with straw to hold it all together. It evolved into what it is today. As he fashions one part or another with clay, he coats it with paint. This keeps the wind and the rain from eroding it away. The more paint, the thicker the coat, the better and stronger it becomes. People come from all over with donations of paint. He uses it very liberally. Leonard estimates that he has put well over 100,000 gallons of paint on his mountain. 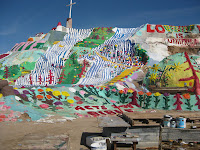