History of the Salton Sea - About 2000 years ago the Cahuilla people occupied this land. When they first arrived the Salton Sink held a much larger body of water - the ancient Lake Cahuilla which was well above sea level. Tradition held that this enormous lake covered the entire valley. Historians estimate that as many as 10,000 Cahuilla once lived here. Their first encounter with Anglo-Americans came in the 1840's, when they permitted travelers to pass through their lands. By the 1850's the Cahuilla lands had been given to settlrs and the Cahuilla lost the resources they needed to survive. Finally, the introduction of diseases to which they had no immunity nearly decimated the Cahuilla. Today, about 3,000 Cahuilla live on reservations. 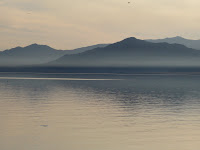 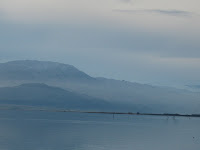 The Salton Sink is a landlocked extension of the Gulf of California. The Salton Sea is California's largest lake which is 35 miles long, 15 miles wide, and 227 feet BELOW sea level. The Colorado River would flood and fill in the sink and at other times it would bypass the sink, causing the lake to shrink or even to disappear. In 1905, the Colorado River broke through the poorly constructed canals and gates that the CDC had created for use for irrigation. For about 18 months the river's entire volume poured unchecked into the nearest low spot - the Salton Sink. This created the lake that we see today.
By the 1950's the Salton Sea had become a popular resort area with two yachit clubs. A large marina and a championship golf course attracted celebrities, but by the 1960's the increasing saltiness had marred the dream of a desert Eden. 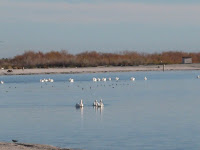 The Salton Sea is one of the world's most important winter stops or birds traveling the Pacific Flyway. By January more than 400 species of migrating birds have made their way to this sea.
Posted by Jim and Sandie at 10:35 PM