We left Canyon Ferry Saturday morning and made our smokey way to Billings. The sky was brown and the mountains were not to be seen.

However, we had a really nice rain Saturday night and Monday which cleared the skies beautifully. I did hear them say on the weather tonight that the smoke will start moving back in. Too sad.

We are staying at the Moose which has six electric only sites but lots of room for boondocking. There is a dump and water in back of the Moose. Not bad for $25/night especially when the KOA is $55 to $75 a night.

As I’ve said before there is a big BUT – this is the noisiest place ever. Between the trains (which are just across the street), the traffic (a major intersection), and emergency vehicles, there is never a quiet moment.

Every year over Labor Day Weekend they hold the Big Sky Polkafest at the Moose. It’s a really huge shindig but I will never understand why everyone has to crowd next to each other. There is a whole grassy area for boondocking but when we got home yesterday, this is what we found. Instead of boondocking over in the grassy area, they are all pulled into our area. Makes no sense to me.

Todd fixed chicken wings on the grill for dinner and then I fixed spaghetti another night. It’s fun to be able to spend some time with the kids.

Saturday night, Jim, Todd and Michaela went to the World of Outlaw races. I stayed home with the pups. It was a lot of fun but they came home covered in dirt from the track. 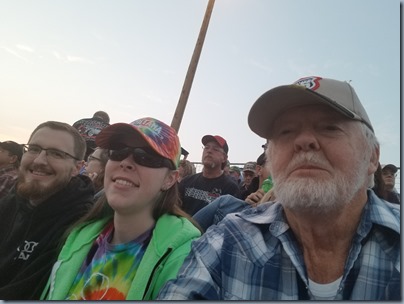 Don’t know who the woman is who photobombed them. 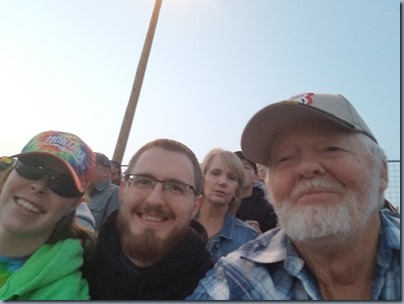 We were able to go to breakfast at Cracker Barrel with Carol one morning. Her husband Bill was Jim’s best friend. We sure do miss him. I forgot to take a picture so this is one I “borrowed”. 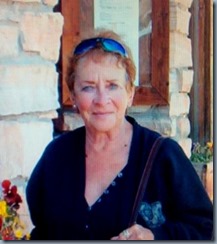 We have also crammed in my eye appointment (one more to go), the DMV, getting a bunch of work done on the truck (yearly maintenance), the oxygen place for Jim’s CPAP machine, laundry (twice), a COSTCO run, stocking up so we don’t have to pay sales tax. Jim also got to visit with a co-worker who had a heart valve replaced.

Skittlez gave us quite a scare again. She got bit by some  kind of bug – probably a spider. Her nose swelled up and she wouldn’t eat. When she won’t eat you know something is really wrong. But the swelling started to go down and now she is back to her normal starving self. Her back legs still collapse sometimes but she’s back to running to get back into the house. She is not an outdoor dog.

Friday night was Burn The Point – a parade of classic cars in tribute to those days when you used to cruise on a Friday or Saturday night. Jim went with Todd and Michaela. 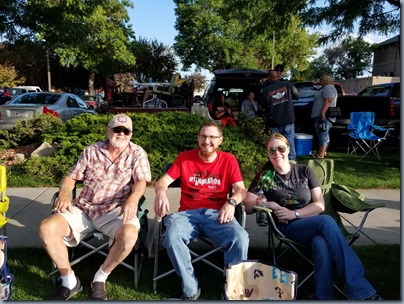 Today (September 1) was time for us to start heading east. Todd stopped by to say good-bye (Michaela had to work). Sure do love these kids. Miss them already. 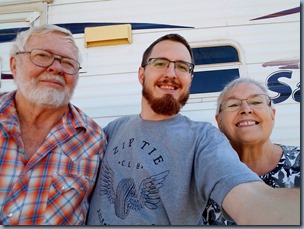