Washington, PA  (I’m so far behind I can’t remember what the temperature was but it wasn’t bad.) 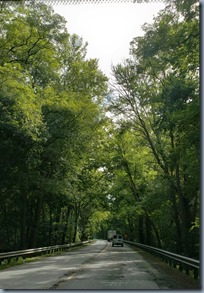 We stayed at the KOA in Washington. It was definitely out in the hills. This is the road from the office to the actual campground.

I got a text from Delores wanting to know if we could meet for dinner. She is married to my high school classmate, Larry. They bought an older home that has been keeping them busy.

One problem, we did not plan to unhitch and they lived north of Pittsburg. Well, maybe that’s two problems. But they were willing to drive down and pick us up to go to dinner. Now that’s friendship.

On our way to the Union Grille, Larry told me that Washington, PA was the one of the leading towns in the Whiskey Rebellion. The Whiskey Rebellion was a tax protest beginning in 1791 against the whiskey tax imposed on domestic products by the newly formed federal government with George Washington as President. 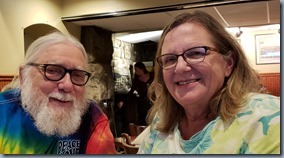 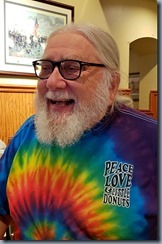 Did you know that they put French fries on their salads in this part of the country? Really strange.

Thanks guys for making the trip down to see us. It was so much fun. 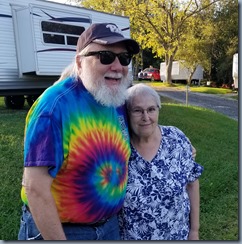 Wish we had more time to explore this area but we pushed on the next day to Martinsburg, WV.