There are many strange and wonderful things to see along our journey and http://www.roadsideameica.com/ leads us to a lot of interesting items. 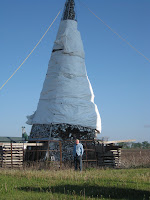 This is the world's largest pile of empty oil cans (all spray painted silver) in Casselton, ND. The 45-ft. tall pile was built in Casselton the 1930s next to a gas station, and quickly became a popular attraction. Its stewardship was assumed in 1973 by the property’s new owners, a locally-owned manufacturing company, which moved the tower 300 feet but otherwise respected its lofty position as a North Dakota’s travel destination.
However, the company has been sold twice in the past four years. The current president of the plant, which manufacturers treads for bulldozers, says of the Pile, “Aesthetically, it’s not something we want around.”
The Cass County Historical Society is feverishly trying to figure out a way to keep the Pile in Casselton.
As you can see from our picture, the pile of cans has not fared too well. We camped at Governor's Inn in Casselton and I saw this strange thing in the field next to us. So I looked it up on roadside america. It is now wrapped in plastic and is falling apart. But at least we got to see it before it was completely destroyed. 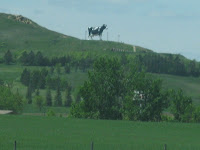 New Salem, ND - According to local history, one of New Salem's early settlers was plowing the prairie in 1883 when two Sioux stopped to watch. The older one turned a piece of the newly-broken sod over so that its grass was back on top. "Wrong side up," the younger explained. The farmer thought about it, admitted that the ground really was better for grazing than breaking, and New Salem's dairy industry was born.

Today, New Salem is cow crazy. Its high school sports teams are named the Holsteins. And overlooking the interstate, on the only hill visible for many many miles, is New Salem's pride: Salem Sue, the World's Largest Cow.
Sue was built in 1974 for $40,000 put up by the New Salem Lions Club. Her stats are impressive: 38 feet high, 50 feet long, six tons of reinforced fiberglass, so big she had to be built in three sections to get her up the hill.
A free brochure available at the gas station explains that Sue's "primary purpose is to honor and advertise the dairyman of our area ... the hardworking, persistent, and informed dairyman who is an asset to his community, church, the economy, and his family." The brochure concludes with a brief ditty, the Ballad of the Holstein:
Her presence shows that New Salem grows
With milk-producers' yields;
We've got the cow, world's largest cow
That looks across our fields.
Sue stares north, over a flat quiltwork of grass, clover, and hay that stretches to the horizon, doing her job.
Posted by Jim and Sandie at 7:03 AM