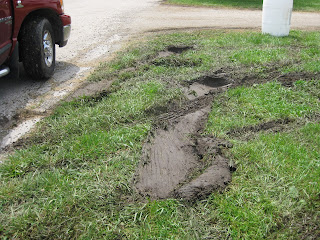 Okay - it's still raining. Jim is the only one who has rubber boots but that is going to change when we get back to Billings. The girl's practically have to swim out to go to the bathroom and they aren't impressed.
The best news yesterday was that Jim got stuck in the mud in our front yard. And a dodge had to pull him out. If you don't think people have had fun with that.
The jacks in the front are on pads that are slowly sinking into the mud. The same with the rear stabilizers. They keep saying it is supposed to dry out tonight and warm up for the next couple of days. I sure hope so. We have decided to stay until Saturday so hopefully the ground won't be quite so saturated. Other than getting stuck in the mud nobody seems to care whether they get wet or not. I think that comes with the life style. Women aren't worried about what their hair looks like. Men don't care if they have mud on their shoes. It's great.
Went to a seminar on Recognizing Severe Weather put on by the National Weather Service. His best advice for us was to get a weather radio which we have. Don't try to set it on a certain county because they don't issue alerts based on counties any more. Just set it to the local NOAA station and put the alert on. He also said to use http://www.weather.gov/ as the best resource on the web. Flat out told us that if severe weather is coming, get out of the RV and get to any other kind of shelter as soon as possible. But not a highway underpass. 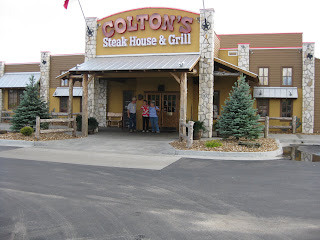 Dinner last night was a great success. We had 18 people and really had a great time. We went to Coulton's Steak House. The only bad thing was that they put us at a long table so people on each end couldn't visit with each other. But the groups at each end all visited with each other and everybody was talking - so I think it was a success. 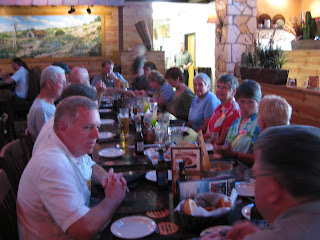 The guy you can see the best is Kyp. The back of the head belongs to Dave. I'm in the blue with the really gray hair-on my right is Diane and on my left is Jan. On Jan's left is Loralie and next to her is Deb. We tried to sit the husbands and wives across from each other. 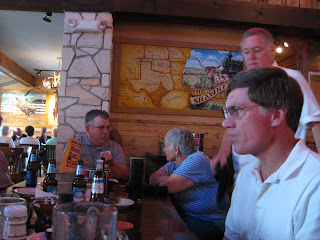 I'm visiting with Dave, Kyp is standing and Lee is in the front of the picture. 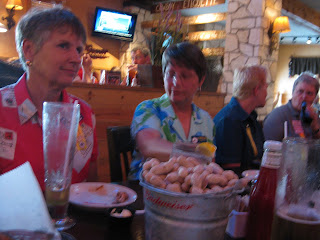 Here we have Jan, Loralie, Deb (who always seems to have her head turned) and Gay. 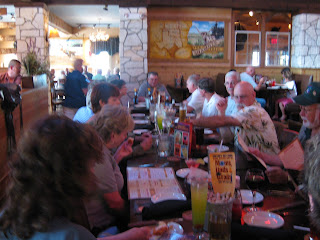 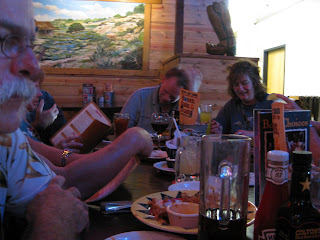 The mustache in the front belongs to John. The couple are Eric & Karla.
Jim is off to drive the shuttle this morning. They didn't need me which is fine. We are signed up again to drive tonight from 4 to 10. They were just desperate for drivers.
Posted by Jim and Sandie at 9:09 PM