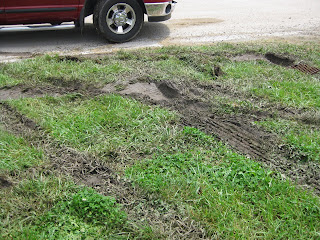 More mud.
Only three of the five shuttle cars were running last night. One died and had to be towed away and another one was out of gas. So we were busy all of the evening. Last night was the talent show night called Ham-O-Rama. When Jim and I heard them practicing yesterday afternoon, I figured I wouldn't be missing much driving the shuttle. I understand a couple of the acts were fantastic but most of them were just okay. So that's why people kept leaving and needing a ride back home. And after the show when I was taking people back, all they talked about was whether or not they were going to be able to get out of here. I didn't really hear much about the show at all.
This morning we did laundry. There was just no choice - it had to be done. The laundromat was full of Escapees. That place probably made a killing this week.
Jim went to the boondocking seminar but was not impressed. Another couple we know also went and they agreed with Jim. Then at 3:00 were the closing ceremonies. They told us that there were 750 rigs here and approximately 1300 people. A lot smaller than last year's but Tina told me that was because of the Memorial Day Week-end and many people had college graduations and high school graduations and weddings to go to. Just not good planning. But maybe a good thing with all the mud.
Then they gave away the volunteer door prize and the grand door prize - neither of which we won. In fact nobody in our group won anything this week. 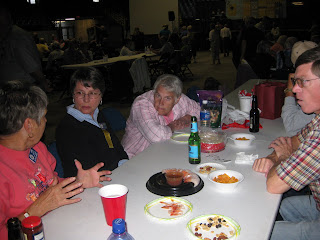 Last night they had a dance with a guy playing cd's. So Jan & Bill, Loralie & Lee, Eric & Karla, and Jim & I went. We mostly visited which was a lot of fun. Jim and I danced a couple of dances and we were the only ones in our group to do that. We stayed until 10 and then came home to collapse.
Jan, Loralie, me and Lee on the other side of the table. 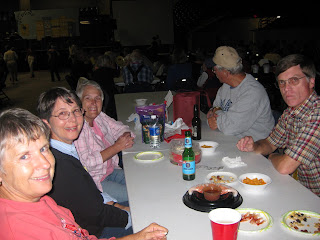 The back of Bill's head. Finally, Bill. 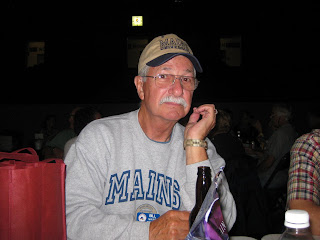 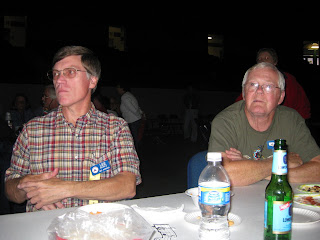 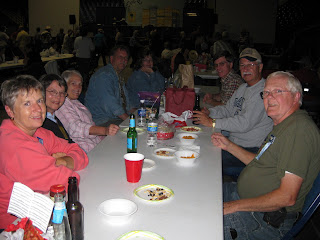