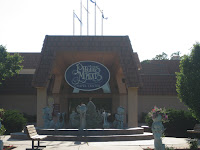 A few years ago, we took a bus tour with my Mom and Dad to Branson and one of the stops we made was at the Precious Moments theme park. So this visit brought back many great memories. It was closed when we got there and I also found out that most of the "attractions" are closed because of the economy. But wonderful memories still. 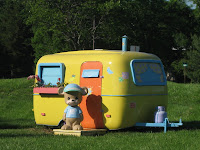 In 1989, Sam Butcher built his longtime dream - a chapel in Carthage, MO. The Precious Moments Chapel in Carthage was actually a theme park. The "Chapel" itself was a structure within the park and was completed in 1989. The main attraction of the park was the "Fountain of Angels", incepted by Sam Butcher himself. The indoor attraction propelled water up to 80 feet high in sync to music, lights, and visual effects. Two separate performances were held every day from March through December. 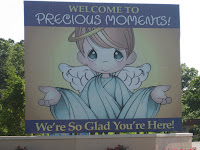 In January 2007, they announced the discontinuation of its attractions including the "Fountain of Angels" due to "financial difficulties arising from diminished numbers in paid visitors due to higher gas prices and general decline of the brand".
The original artwork was created by Sam Butcher in the 1970s. His artwork depicted young children with distinctive eyes and were often accompanied by inspirational message.
Posted by Jim and Sandie at 6:34 AM