Jim has become the resident fixer. So far he's helped Loralie and Lee with their fan (making the replacement blades fit) and their stabalizers. Helped Jan and Bill with many things and more to go. Helped the poor guy next door get his sewer and everything set up. Maybe I should hire him out.
Last night we ended up with 12 people at our house. We planned it for after dinner so everybody just brought their own drinks and chairs.
Decided we are going to a restaurant for our Class of 2009 dinner tomorrow night. It is raining and everything is really soggy. Sure hope it dries out before we try and pull out on Friday. We're going to a steakhouse that also serves fish because some of our people don't eat red meat. I'm hoping we'll have about 18 people there so it should be a lot of fun.
We don't have any idea how many people are here but it's not near as many as we had at Gillette last year. The Memorial Day Week-end really stopped a lot of folks from coming and also Missouri during tornado season turned some people off. I think they'll probably give us some stats on Thursday at closing ceremonies.
I sent Jim to a seminar on holding tanks this morning and he came back really impressed with the presentation. He said something about Calgon and Dawn but I wasn't paying a lot of attention. I went to the book exchange while he did that. 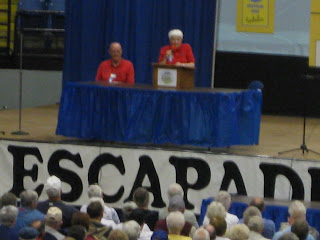 Then we went to Kay and Joe's presentation: "They're going to have a depression but we are not invited." They are such a great couple. Really funny. They are quite elderly now and don't RV but you can tell they really miss their life on the road.
I forgot to tell you all about the dog walking for when we went on the HOP. Somehow the whole thing fell through the cracks and didn't get set up and the organizers felt so bad. So they came up with volunteers to walk the dogs - well we got Bud and Cathy Carr as our dog walkers. They just happen to be Escapee Number 3. That's right - 3! She is one of Joe and Kay's daughters. And they were just so nice and the girl's just loved them. I thought Skittlez might just hide behind the love seat when some stranger came to the house but they came the day before and met the girls and both of them were right there at the door ready to go out. Still seems strange to have No. 3 walk your dogs. We're number 94140.
We were going to go to a seminar this afternoon on enhancing your RV lifestyle but I wanted to get everything arranged for the dinner tomorrow night and we needed some groceries. So we did that instead. A lot of the seminars are the same ones we attended last year so we're not going from sunup to sundown like we did last year. We're also going to drive the shuttles tonight. I'd rather drive than sit at tables and hand out stuff. I went over this morning to double check how they were doing on drivers and only one person had signed up for the 7-10 shift tonight. Poor Jim - I just volunteered him. There's another show tonight. The Brett Family - they perform at the Legends Family Theater in Branson so I think they should be great.
Posted by Jim and Sandie at 8:48 PM