We really enjoyed this drive and the scuptures have to be seen.

Regent, ND - There's no better example of ND-can-do spirit than the Enchanted Highway, a 32-mile stretch of paved county highway between Regent and Gladstone, reaching I-94.
If you build it, they will come...

Thirty miles south of the nearest major highway, the town of Regent was dying, and Gary Greff decided someone had to do something about it. 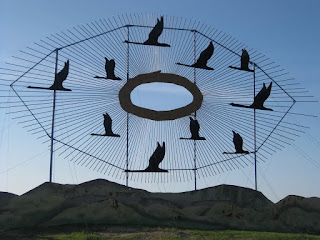 A metal sculptor and retired school teacher, Gary started the work in 1990. His master plan was to create ten giant sculptures, one every few miles along Regency-Gladstone Road, paired with picnic areas and playground equipment. All the sculptures face north, toward the oncoming traffic from the interstate. Seven have been completed including the sculpture that towers along I-94, essentially an artistic billboard enticing travellers to exit and head south to Regent. Geese in Flight went up in 2001, next to the Gladstone exit -- and it is claimed to be the World's Largest Outdoor Sculpture. 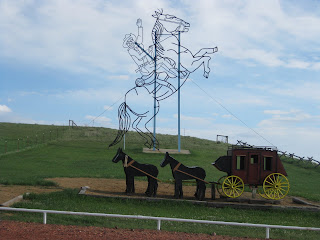 There's a depiction of Teddy Roosevelt riding a bucking horse (3 miles north of Regent) and a Tin Family (1.5 miles north), which includes a propeller-headed boy holding a sucker. 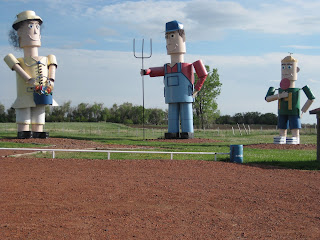 A Covey of Pheasants (9 miles north) was completed in fall of 1998. The rooster is 60 feet long, and the hen 50 feet. Three 12-foot high chicks complete the scene. 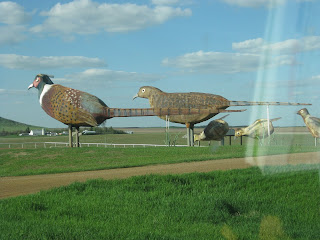 There were also hundres of the real life, small pheasants so the going was slow to avoid killing them. 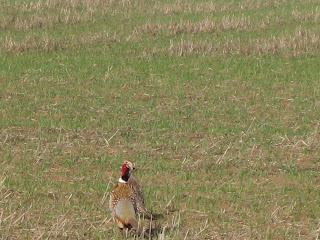 The World's Largest Grasshopper went up in Spring 1999. In September 2002, a giant deer leaping, Deer Crossing, was installed. 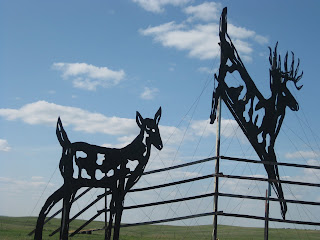 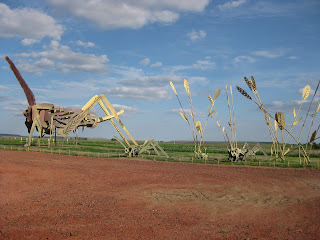 In early 2007, Greff completed Fisherman's Dream, his seventh and most complicated sculpture, with metal fish leaping up 70 feet through a metal pond surface. 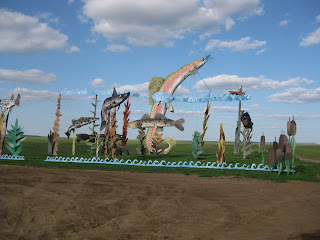 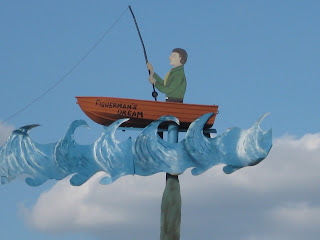 Gary can’t weld during dry months (there was a brush fire at Teddy Roosevelt), but has scheduled his activities (painting, building, etc) out months in advance.

The grand project started years ago with some volunteers. Gary thought local farmers would help, because they knew about metal bending and welding. Some farmers (except one, apparently) did give him good terms on leasing land to show the work, $1 for 20 year lease, with renewal.
Most days it's Gary himself continuing to build the Highway. He does all the maintenance, cuts the grass under the statues, and builds the parking areas and fences. A local boy scout troop and shop class have helped with some of the signs and picnic tables.

Each new construction on the Enchanted Highway is a struggle by the visionary artist, who scrapes together individual donations of money and material. He is currently working on a massive spider web that will be filled with many many spiders.
Posted by Jim and Sandie at 7:39 AM