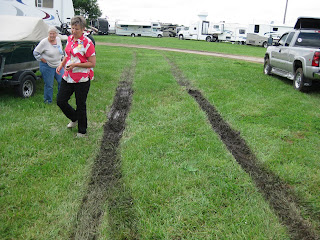 And people laughed at us when we took our boat along.

We have had at least 3 inches of rain since yesterday, it is still raining, and is supposed to continue to rain through tomorrow. People are lining up to get in our boat when we all start floating away.
The big problem is that we are parked on grassy mud now. People are getting their vehicles stuck so can you imagine what this will be like on Friday. Hopefully it will dry out a little bit on Thursday and overnight.
Jim and I both were drowned rats last night after we got through driving the shuttles. You would think you don't get wet but you have to help people get in and out (remember we're all old) and my car was giving me grief - emergency brake just dinged constantly which is nerve wracking and the dash lights either wouldn't come on or when they did they wouldn't go out. the leader of our pack tried to fix it for me while others were at the entertainment which meant I was out in the rain. Thank goodness it wasn't real cold.
I didn't get my same lost lady but I ended up with a couple (he was in the backseat) and couldn't see real well and she didn't have a clue. We ended up driving around a little bit but we actually found their house. Most of the people could give me directions right to their place so that was a good thing. Those who are doing the generator thing instead of hookups don't have a road to their homes - just grass. As the night wore on more and more of them had to walk from the road because we didn't dare drive in their area.
Now for the evening's entertainment. We still haven't won any door prizes. In fact, nobody in our class has won anything yet. Very sad. The entertainment last night was okay - one guy described it as Osmond entertainment and I have to agree with him. It was a mom and dad and their two sons and one daughter. Their voices are almost too professionally sounding - they'd try to do a country song but it sounded more like a church song. If that makes any sense to you. So a lot of people left early which meant that we had to keep the shuttles running all the time and didn't get to sit and listen to them very much. The night before, nobody left early so we got to see the whole show. However, those that stayed to the end that we took home after it was over loved the show. Thought they were fantastic. And that was the majority of the people who went.
Jim's getting ready for another seminar on holding tanks - this one about not using any chemicals. Can you tell that holding tanks have become more of an issue for us since we are now living in this fiver? Jan has a couple more projects for Jim but they are outdoor projects so hopefully he can get them done for her on Thursday.
Posted by Jim and Sandie at 9:00 PM