We finally arrived at Sedalia and Escapade.
On Friday, we joined Jan and Bill on a HOP (Head Out Program). The HOP was to explore the areas around Clinton, MO where the James Gang hung out. However, we were very disappointed.
The breakfast that they fed us before the HOP was great! Really good biscuits and gravy and sausage and fruit and hash browns and cinnamon rolls. If only the HOP had been so good.
We got on the bus and took off which went okay. But we get to the small town of Wilson or Winston or something with a W and the person from the Chamber tells us that this brick building is a bank that Jesse James robbed. But there are three brick buildings and she doesn't tell us which one and they don't stop the bus so we can get a picture. I found out later that that the bank (or store depending on who you talk to) was robbed on May 13, 1875 and the gang only got $300.
At this point a woman in costume gets on the bus and tells us about her life but I never did figure out for sure who she was supposed to be. I think her brother was Frank James and after her husband was killed she and her children lived with him.
The bus starts out this narrow country road and she tells us that this house on the rise is Frank's house but she doesn't say which side of the road it's on and there are houses all over the rise and the bus keeps on going. But nobody took into consideration that this country road ends. And we're on this really big long bus. So our poor bus driver had to figure out how to turn around - had to get out of the bus several times to look at things and it probably took us about 20 minutes to get turned around. (A good thing it took so long - but that'll be explained shortly).
We head back down the same road and this time they did stop at a house. Somebody finally asked if that was Frank's house and turns out it was. I figured we'd get a tour or something but no - they did let us off the bus long enough to take a couple of pictures of the house. And then back on the bus. 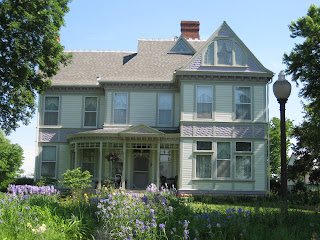 So now we get to the town of Clinton and they park the bus and tell us that we have 45 minutes on our own to kill before they feed us lunch. Now there is nothing open even though it's Saturday because it's a three day week-end. Not even the Chamber or the Courthouse was open. So we all just kind of sat around waiting for lunch to be served. Can you imagine how long we would have had to sit there if the bus had been able to turn around really fast. Did take a picture of the courthouse though. 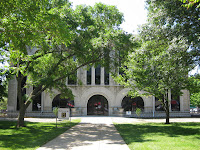 They fed us a pretty good catered meal in the rotary building and had told us we were going to have a reenactment of the James Brothers robbing a bank. Well, three people showed up and kind of stood around and then took some of our things, gave our things back and left. Really rather strange. 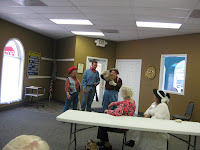 Then we had another half hour to kill before we got a tour of the museum. The Henry County Museum which is in an old Anheiser-Busch distribution center. A great museum - especially for such a small town. And the people are proud of it which they should be. BUT - they divided us up into four groups with four different tour guides. Jim and I were split up and my guide was so boring I couldn't stand it. She was a nice person and a volunteer, but she didn't have any idea what the things were or any of their history and our tour was over with long before Jim's. I finally gave up on mine and went down and visited with a bunch of others who also walked out on our tour. Jim had a fantastic guide and he was fascinated the whole time. The guy really knew his stuff and Jim said it was so interesting. 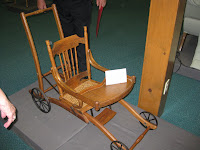 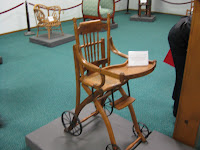 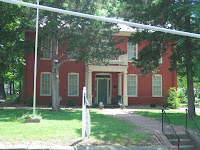 We then had another gentleman (who just happened to be Jim's tour guide) get on the bus and tell us all about Judge Dorman. The Dorman House was built in the 1850’s and was home to Judge J. G. Dorman, his wife Udolpha Miller Dorman and their seven children. The Dorman House is now a completely restored Civil-War era home. Judge Dorman was captain of the Home Guard during the Civil War, was a merchant, later a county commissioner and state representative. The Dorman House was the first two-story brick home built in Clinton.
The War Between the States was not a stranger to the Clinton Square. On three dates, March 10, 1862; July 9, 1862; and October 25, 1864, Clinton was mentioned as the site of small skirmishes. It is believed that one skirmish might have taken place on the Dorman House lawn.
We got back on the bus and came home. That was it. Let's just say we won't do that again. 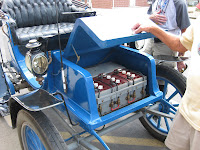