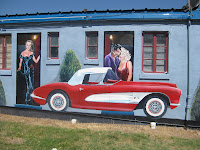 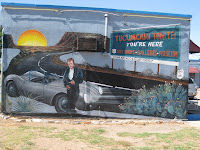 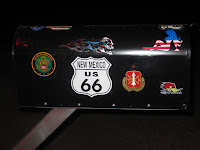 Old U.S. Route 66 runs through the heart of Tucumcari. Numerous businesses, including gasoline service stations, restaurants and motels, were constructed to accommodate tourists as they traveled through on the Mother Road. A large number of the vintage motels and restaurants built in the 1930s, 1940s, and 1950s are still in business despite intense competition from newer chain motels and restaurants in the vicinity of Interstate 40, which passes through the city's outskirts on the south. 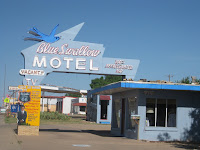 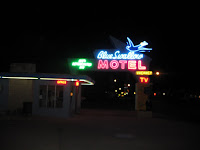 Tucumcari is the quintessential Route 66 town, with its procession of snapshot-ready motel signs and buildings from a bygone era of highway travel. There's the famous neon of the Blue Swallow Motel, the arrowhead motel sign of the Apache, 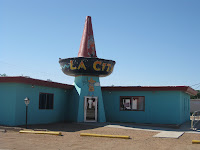 the perky Mexican hat atop the La Cita restaurant, and the Indian teepee facade of Tee Pee Curios. 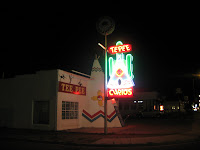 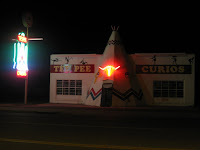 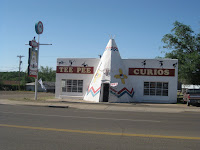 The "Route 66 Monument," on the other hand, is a more recent addition, a semi-whimsical tribute to the Mother Road. Artist Tom Coffin was commissioned by Tucumcari, the New Mexico Highway Dept., and the NM Arts Commission to create the sculpture, set on a sloping base that looks a bit like a Tex-Mex temple made of sandstone tires and serpentine, two-lane road outlines. Dedicated in 1997, it's topped with a chrome, Cadillac-like fin, tail lights, and a pair of tubular Hippie Font sixes -- all headed west. 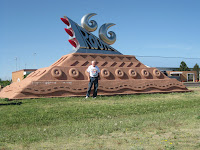 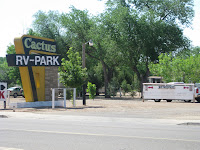 This is the RV Park we stayed at in Tucumcari which is on RTE 66.
Posted by Jim and Sandie at 6:40 PM