THE BATTLE OF CARTHAGE, MO 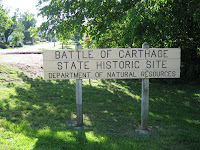 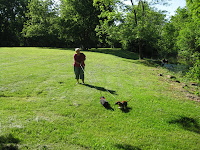 The battle itself was a mobile engagement that was spread out over a distance of 10 miles. Col. Franz Sigel and his army of 1,100 well-drilled, fully armed men were sent to southeast Missouri to stop Gov. Claiborne Jackson's army of 4,000 armed and 2,000 unarmed soldiers from banding up with Confederate troops in nearby Arkansas. On July 5, the troops met about nine miles north of Carthage and the skirmishes began. The most severe fighting took place at crossings of Dry Fork Creek, Buck Branch and Spring River. After the smoke cleared and the sun set, the Confederate Missouri State Guard was victorious, however, the Union troops skillfully escaped a superior force with minimal losses. 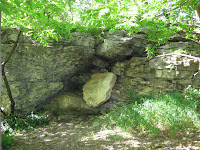 The battle was rather meaningless from a tactical or strategic view, though it was deemed a victory by the Missouri State Guard. The battle also marks the only time a sitting U.S. State governor has led troops in the field, and then, against the Union to which his state belonged.
Posted by Jim and Sandie at 9:05 PM