After leaving our free campground we drove through Las Vegas without even stopping and ended up in Kingman for the night. Then we headed towards Flagstaff and were greeted by this beautiful site. I have no idea what mountain it is but it’s sure pretty with all the snow on the top. 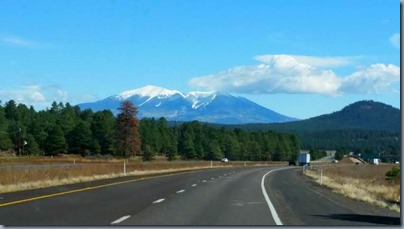 At Flagstaff we headed south on I-17 towards Camp Verde. This was our neighbor’s truck in the RV park in Camp Verde. It’s a 1956 Ford Medium Duty truck on a 1959 Chassis. They pull their Montana fifth wheel with it. 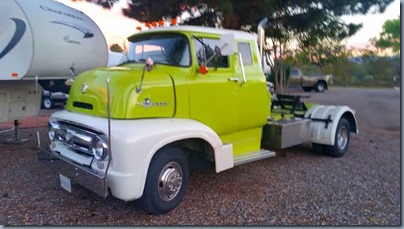 From Camp Verde we only had about 130 miles back to AJ. A nice easy drive down the mountain. It was for about ten miles and then it came to an abrupt halt.

Jim looked at his outside mirror and saw smoke. He immediately got us through traffic to the shoulder and went to check on it. He originally thought it was a tire but we lost the bearing on the left front tire of the Bungalow.

We contacted Coach Net, our roadside assistance about 8:20. They got out information and when they found out we were sitting on the side of the interstate, they sent out a Highway Patrol Officer to check on us and make sure we were safely off the road far enough. I thought that was really nice of them. We were parked at a terrible angle so we had to sit in the truck and only used the camper for those necessary things.

But he finally showed up and he and Jim crawled under the rig to see how much damage had been done to the axle. Jim saw the problem before we lost the wheel which was a majorly wonderful thing. 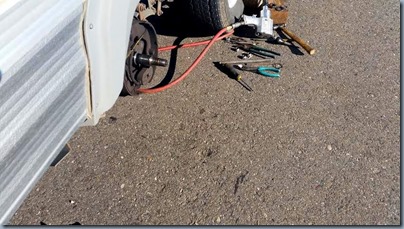 They determined that the axle didn’t have much damage and that only the bearings need to be replaced. Next problem – the service dude only had one bearing and we needed two. So off he went to find another bearing and we didn’t see him again for another hour and a half or so. Finally got back and we did a happy dance when we found out he was able to locate another bearing.

He replaced the bearings and 8 1/2 hours later we were able to get off the side of the road. By this time it was almost sunset and we were exhausted. We pulled into Sunset Point Rest Area for the night. 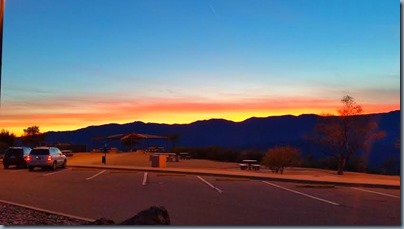 Thank goodness Jim is able to sleep through a lot of noise because the trucks were really noisy and I sure didn’t get much sleep.

We were up early the next morning and stopped for breakfast in Rock Springs. We felt we deserved it. Got back to the RV park about 10:30 and we were so happy to finally be home. 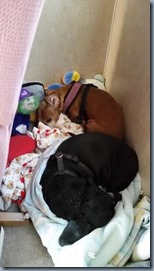 The girls were fabulous. They knew something was wrong and didn’t bother us at all except when they desperately had to go. That was a problem for Skittlez because all the trucks going by scared her so she held it until she was desperate.

Took this picture of them at Sunset Point when they were both snuggled up together in their nest behind Jim’s chair.

We had all the bearings replaced and repacked on the Bungalow in May before we had planned on leaving AJ. Needless to say, Jim is going to take the trailer back and have a long talk with them. I’ll let you know what happens.