Rexburg, ID – I don’t remember what the temps were but it was nice.

Many years ago in 1967 I finally graduated from high school and headed off to college in Rexburg, ID. At that time the college was called Ricks College. The registrar thought that the enrollment that year would be about 3000 students and was very surprised when it was well over 3400. This made Ricks the largest two year college in the nation.

I found this picture on the internet of the college back in 1967. I lived in the fourth dorm in the upper left hand corner of the picture. 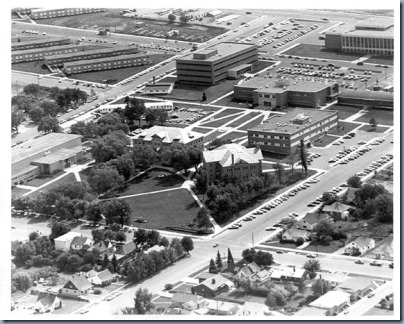 I thought it would be fun to revisit this site where I spent nine months of my youth. Yep. It only took me nine months to figure out that I did not want to go to college any longer. I was ready to move on someplace more exciting than this small town in Idaho.

I couldn’t find the population for the town back in 1967 but it was probably around 6000 people. Today the city has over 30,000 folks living there. It has changed just a bit.

In 2001 Ricks college became BYU-Idaho and went from a two year college to a four year university. The enrollment has also increased greatly – 2015 enrollment showed 16,738 students on campus and 17,979 students enrolled online.

The changes were rather overwhelming and I didn’t recognize anything and didn’t take any pictures. I found this picture, taken this year, online. 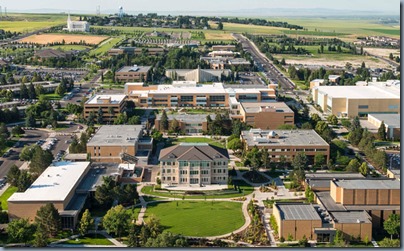 We had planned on staying at Beaver Dick Park and it looked wonderful when we drove out there. But when we got out of the truck the bugs were horrendous. Millions of them flying everywhere. Those of you who know me, know I don’t do well with bugs. (And that’s an understatement) It looks like a fantastic place for only $5 a night.

But we made the decision to try and find an RV park which was a difficult chore. Wakeside RV Park didn’t return my call, Thompson RV Park is closed for the season and that left Sheffield RV Park. The owner was really nice but we will never stay there again. The sites are really crammed together and very difficult to get into. It was hard to tell what was road and what was a site. Definitely not our kind of park.

We had planned on staying two nights but one night was enough and we headed on down the road to Craters of the Moon.