Not the new computer, that’s for sure. I’m using my old beast to get this blog post made. And right at the moment I’m love the old thing. Major problem is the fact that it doesn’t want to charge any longer and the battery only lasts about 10 minutes. This is the second battery we’ve put in. Just not going to last too much longer.

Anyhow – we arrived in Billings on Saturday afternoon. We were able to make it into our son’s subdivision and into his driveway even with all the road construction. 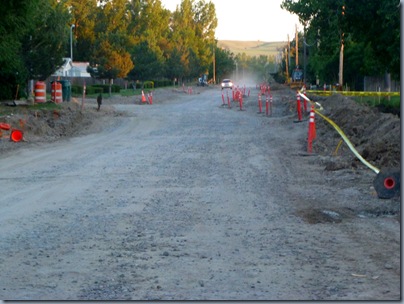 Sunday was Father’s Day. When Todd got home from work, Jim threw some steaks on the grill and we had mashed potatoes and corn on-the-cob.

Monday was Todd’s 27th birthday. We took him and his beautiful bride, Michaela, out to dinner. Michaela’s birthday was June 3 and their first wedding anniversary is on the 24th. Lots of fun times to celebrate. 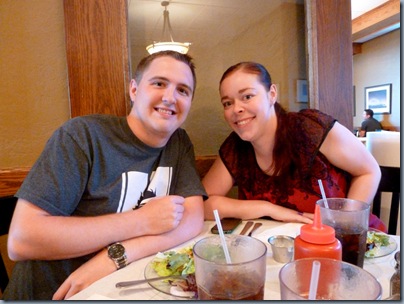 Tuesday was my doctor’s appointment with the Orthopedic Surgeon who repaired my broken ankle and ruptured Achilles tendon.

In this first x-ray, you can see, on the left, where a piece of the ankle sheared off and is standing straight up. It’s supposed to be laying down. 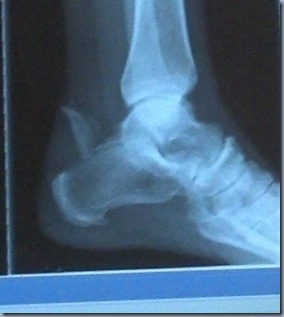 Here is what it looks like after the repair. 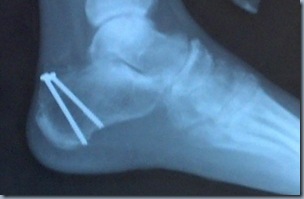 I wanted to discuss with the surgeon the possibility of having the screws removed. I have trouble wearing shoes because the back of the shoe rubs against the ankle and becomes very painful. However, the good doc told me that it’s not the screws that are causing the problem but a thing called a “pump bump” or Haglund’s Deformity.

A “pump bump” is a bone enlargement on the back of the heel and the soft tissue near the Achilles tendon becomes irritated when the bony enlargement rubs against shoes.

Heredity and fractures are the main causes of Haglund’s deformity. Normally, surgery can be done to shave off the enlargement. However, in my case, when I ruptured my Achilles tendon, they had to drill holes in my ankle to sew the tendon back together again. Therefore, the surgeon could only take a very small part of the enlargement without running into problems with the tendon.

Surgery is not going to be an option for me. I’ve lived with this problem for almost five years now and will continue to do just fine.

Jim continues to work with Windows8. He has a lot more patience than I do.