Rick and Paulette (http://rickpaulettervjournal.blogspot.com/) held a contest on their blog. Rick had received five extra copies of the 2011 version of Microsoft Streets & Trips and he was kind enough to want to share them with his blog followers.

We won! I am so excited about using this program. I’ve read really good things about it but have never bought it. I’m sure it will save us from a lot of the situations I’ve gotten us into that took Jim a lot of maneuvering to get us out of. 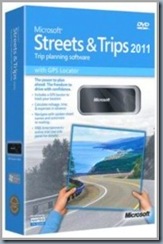 I’ll give you an update after I’ve had a chance to use the software. Since most of you know I am not a computer person, it could prove very interesting.

However, I do need to get some tax returns done before I spend much time playing so be patient.