Back in Apache Junction we have been doing laundry, more laundry, and more laundry. We’ve also been sweeping and vacuuming and dusting and then doing it all over again to try and get rid of some of the sand and dirt from three weeks of boon docking. (Even with all the work that comes afterwards, I still love being out there in the desert.)

We stopped at Blue Beacon and had the outside of the coach washed. For $35 they sure do a great job of getting the desert off the rig.

Took time to visit with my Aunt Happy and my sister. And then the cold weather set in. It’s really hard to work up any enthusiasm for doing very much when it is so cold. 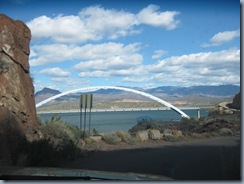 Jim got one day of fishing in before it got so cold and we took a drive up the Apache Trail. 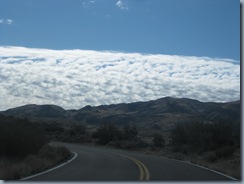 The Apache Trail was a stagecoach route that ran through the Superstition Mountains. It was named after the Apache Indians who originally used this trail to move through the mountains. 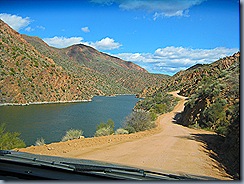 This historic road covers some of the most rugged terrain in Arizona. The Trail winds steeply through 40 miles of rugged desert mountains, past Canyon and Apache lakes. The land surrounding the road rises steeply to the north to form the Four Peaks Wilderness Area and to the south to form the Superstition Wilderness Area. 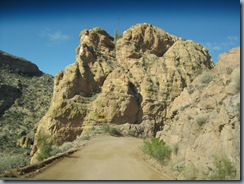 The narrow, winding road is unpaved from just east of Tortilla Flat to Roosevelt Dam. 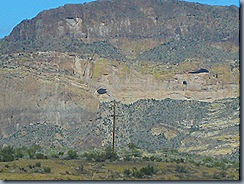 There are steep cliff drops and little in the way of safety barriers. The trail requires caution when driving and it is not recommended for large vehicles. In fact, this 40 miles took us 3 hours to cover because the road is definitely not in good condition. Most of the time you can only drive about 25 mph and a lot of the road you are down to 10 mph. But absolutely beautiful scenery. 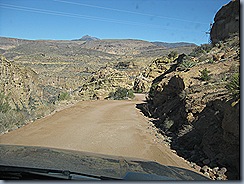 A couple of years ago I posted about our trip to Goldfield Ghost Town, The Lost Dutchman Museum, Canyon Lake and Tortilla Flat. The road had been washed out so we didn’t venture any further on that journey. 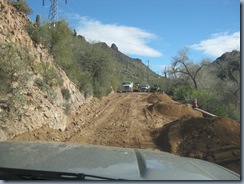 This post will show pictures of the area past Tortilla Flat up to Apache Lake. 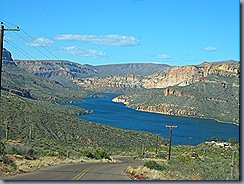 From Apache Lake we continued on another 12 miles of unpaved, often one lane road, to Roosevelt Dam and Lake, and then to Globe and back to Apache Junction on the paved road. 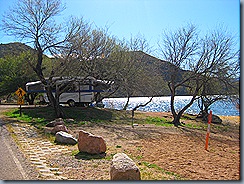 There is a campground at the north end of Apache Lake – Burnt Corral. It was really a nice campground, right on the lake and beautiful sites. But there is no way I would try and take our motor home into it on that road. Maybe if we had a pickup and camper. Jim said the fishing would have to be spectacular in Apache Lake before he would even be willing to take the boat over that road. 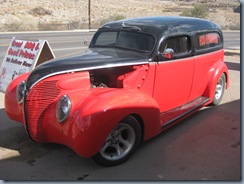 Had lunch at Hog Haven in Globe which serves really good BBQ but I go for the fries.

There are also some really nice campgrounds around Roosevelt Lake and we plan on taking the motor home up there for a week. We’re going on the paved road up through Globe this time.