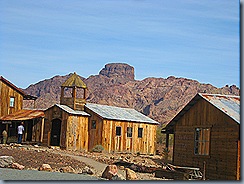 The Castle Dome Mountains are a mountain range within the KOFA National Wildlife Refuge near Yuma.  Castle Dome peak, the high point of the range, is a prominent and distinctive landmark and is 3,776 feet  high. Castle Dome was named by American soldiers at old Fort Yuma in the 1880s. Castle Dome is the rock formation behind the Church. 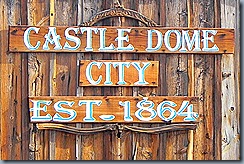 Jacob Snively after serving as secretary to President Sam Huston began Castle Dome Mines is 1862. The mines were the second patented in Arizona. In 1864 Castle Dome City's population was 12.  By the 1880s the population of what was then called Castle Dome City exceeded that of Yuma's. 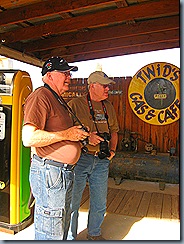 (Jim and Paul at the gas station)

Castle Dome Mines is the longest working mine in Arizona.  From 1862 - 1979 the mines and the lives of those who worked them thrived.  In 1979 when silver prices dropped to an all time low the mines were closed.  Castle Dome Mining District was left to the sun and forgotten. Allen and Stephanie Armstrong found, purchased, and began restoring this rich Arizona history. 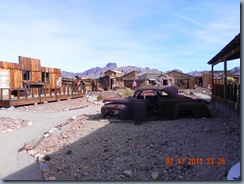 Today you can explore over 37 restored buildings full of artifacts and stories as diverse and interesting as the people who lived, loved and died here. 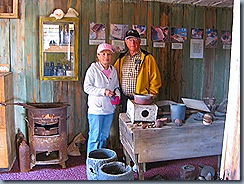 I decided we needed to take a break from visiting and eating and I really wanted to see this ghost town so we rounded up Mike, Sandy and Paul and went exploring. (Sandy and Mike)

(Jim standing at the entrance to the mine.) 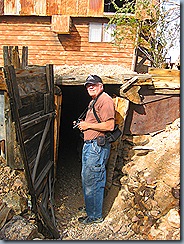 The directional sign to the town is after you need to make the turn so I was glad I had read the directions carefully. Once you make the turn, the paved road ends and you drive about 10 miles on a gravel road. But it was definitely worth it.

We spent a couple of hours wandering through all the buildings and reading about the history of the people who had lived here. I would definitely recommend a visit to Castle Dome Ghosttown. 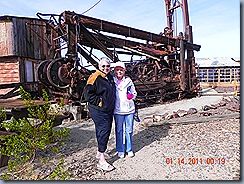 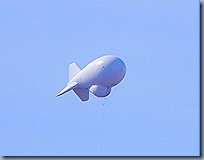 On the way, we passed a weather balloon which is also used as a surveillance balloon for illegals.