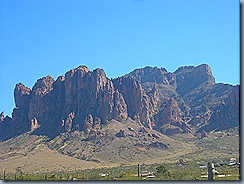 I love the Superstition Mountains. And I especially love the history and tales that surround them.

Jim, Dianna (my friend from grade school) and I headed up to visit Goldfield which is only about five miles from Apache Junction. Jim and I had been there two years ago but I wasn’t able to do much walking because of my ankle and I really wanted to go again. Dianna had never been there before, so off we went. 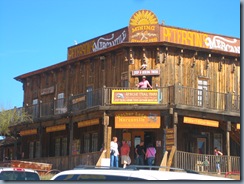 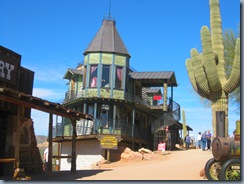 This “official” find, coupled with the legend of the Lost Dutchman Mine, which had been circulating for years, led plenty of new miners to the area and in no time, the town boasted three saloons, a boarding house, a general store, brewery, blacksmith shop, butcher shop, and a school. For five years the town boomed until some 1,500 souls were residing in the burgeoning city. 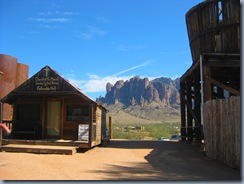 But like other gold camps, Goldfield’s bustling days were quickly dashed when the vein of gold ore started to play out and the grade of the ore dropped even more. Just five years after it began, the town found itself quickly dying. The miners moved on, the post office was discontinued on November 2, 1898, and Goldfield became a ghost town. (Don’t the Superstition Mountains look beautiful in the background of this picture?) 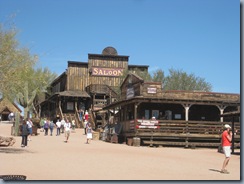 However, some prospectors clung on to the area, sure to find the elusive Lost Dutchman Mine or perhaps, a brand new vein. Others tried to reopen the existing mines, but all attempts were unsuccessful,

But Goldfield was obviously not destined to die permanently. In 1966, Robert F. “Bob” Schoose, a long time ghost town, mining, and treasure-hunting enthusiast made his first trip to the Superstition Mountains and instantly fell in love with the area. He moved to Mesa, Arizona in 1970 and soon began to dream of owning his own ghost town. He had heard of the old site of Goldfield, but upon inspection, he found little left other than a few foundations and rambling shacks. He and his wife,

Lou Ann, then located another five-acre site that was once the location of the Goldfield Mill and decided  to rebuild the old town. 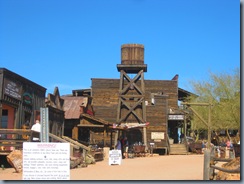 Purchasing the old mill site in 1984, they first reconstructed a mining tunnel, which included a snack bar and opened for business in 1988. Next came a photo shop, the Blue Nugget, a General Store, the Mammoth Saloon and the Goldfield Museum.