This was by far the best day as far as seminars for me.

In the morning we went to an 1886 Cattle Drive. A cowboy from Texas took us back in time and told us all about what life was like on a cattle drive from Texas to Dodge City. He did an excellent job and nobody left early.

One of the most interesting facts I learned was that cattle drives only lasted about six or seven years. Then the railroad was built and it was much cheaper to ship the cattle by rail. The cook on the drive was worth a whole lot more than the cowboys and was paid double what they earned. Each cowboy also picked out five or six horses to take with them and the horses were chosen because of different abilities – a couple that could see well at night, a couple because they were really fast, and others for having a calm disposition. 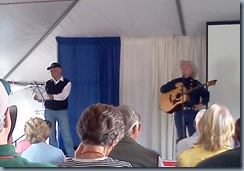 In the afternoon I went to listen to Barry Goldwater Jr. and Marshall Trimble (AZ’s office state historian). Excellent presentation. Goldwater is a staunch Republican just like his father who ran for the office of the President in 1964. However, he did a great job of keeping politics out of the stories until people asked him specific questions about his thoughts on the current election.

Marshall is so entertaining. He tells the most wonderful stories of the history of AZ and also sings folk songs and plays the guitar. Totally enjoyable and I would definitely go hear him again.

While I was being entertained, Jim was learning about solar. We’re not ready to upgrade at this time but some time in the future I would like to add some solar to our rig.

The entertainment Sunday night was Ticket to Ride, a tribute to the Beatles. They did a great job and stayed really true to the sound of the music which is what I like. A wonderful ending to the Rally.

Jim’s big purchase at the Rally were his chocks: 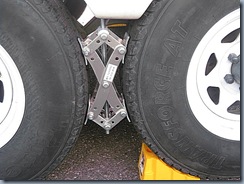