You know how it goes, you do nothing for a week and then everything all in one day. That is how our Monday was. 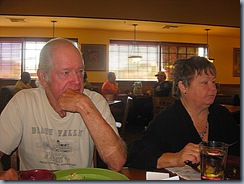 It started with breakfast at Coco’s in Mesa with my sister, BIL, and Sharon and George. Sharon and George did the Death Valley Walk for cancer that we helped with. But they are not going to be doing it this year. They both retired and now live in Nevada. Also, Sharon’s Mom and Dad both died within the last six months and she has had her hands full with all that entails. 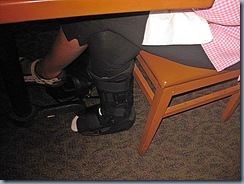 It was so good to see them again. Judy, my sister, fell and broke her ankle. However, they did not put her in a cast. They gave her a boot to wear for a week. She goes back again on Thursday to find out if it needs to be cast or if it will heal just using the boot. Never a dull moment. She’s getting around okay but it really starts to hurt if she lets the leg hang down for very long. 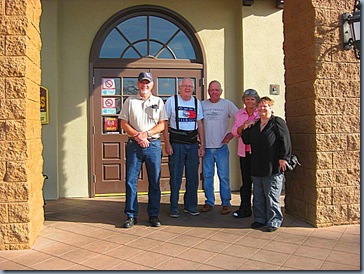 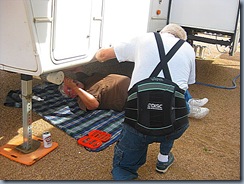 We got home from breakfast and Chuck came over to help (I should say do the entire job) fix our leaky gray tank. He and Sylvia also have a Montana fifth wheel and live just across the street from us. He had already fixed their gray tank and knew exactly what needed to be done to remove the arctic package and get to the tank. 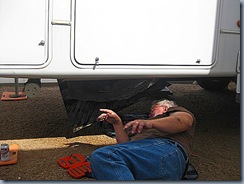 Jim is feeling pretty frustrated because he can’t bend and twist to get under the rig and fix it himself. I keep trying to tell him that he has helped out other people and he needs to learn to accept help as well. Yeah right! 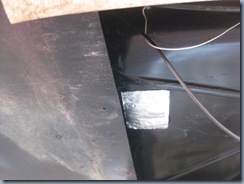 Couldn’t see a hole anywhere so they had to fill the tank up all the way until the pressure of the water showed two small streams of water coming out the bottom of the tank. Chuck was then able to find about a 4 inch crack in the tank. They used two different types of epoxy and aluminum foil to fill in the crack and we are good to go.

The girls were confined inside and were not happy. 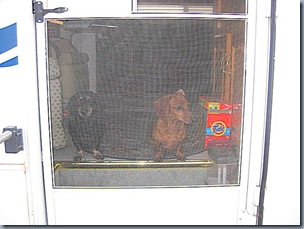 While the guys were working on the tank, I had lunch with Dianna and then we went to a movie. Went to see Denzel Washington in Safe House. I had forgotten how loud movie theaters are. There were only six of us in the movie which is perfect. The move was pretty good. Rather predictable and full of lots of blood. But Denzel is just as good looking as ever and his co-star, Ryan Reynolds, isn’t too bad either. 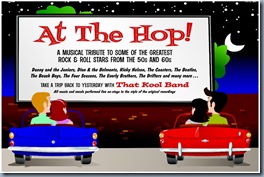 Monday night Jim and I had a date. We went to the Broadway Palm Theater for a night of 50’s and 60’s music. That Kool Band was performing and it was really a fun time. One of the things that I really liked was that they stayed true to the music and didn’t do their “own” interpretations. I knew every song. 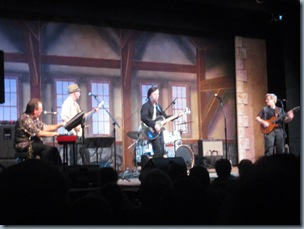 And our sunset Monday night. 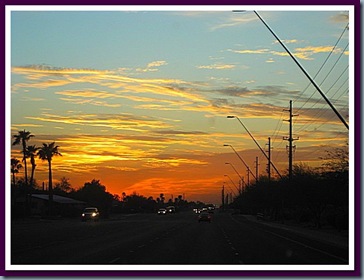