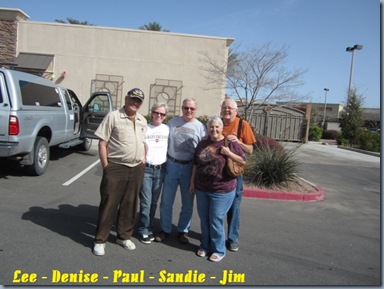 It’s only March and yet people are on the move. Not us, but other people. We had already said goodbye to Paul but when we found out that Lee and also Denise were not far from Casa Grande we just had to have another get together.

We went to Old Chicago which was about the same distance from everybody. What a great time.

But once again, it was time to say goodbye. Lee is headed to New Mexico for a few weeks before he heads back to North Carolina for doctor appointments and such. Denise is slowly making her way east as she heads back to Newfoundland. Paul headed for Tucson before going to a Teton Rally near San Diego and then up through UT, CO, WY and MT for the summer.

Jim and I – well we’re still sitting here. Is it May yet?