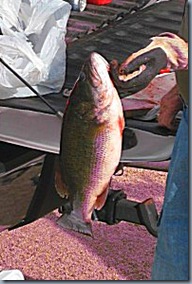 Now this is one beautiful big mouth bass. Needless to say, this was a keeper. Jim also had another nice size bass but for some reason we didn’t get a picture of it before it became filets.

He’s been having a great time going fishing and all of a sudden lots of the guys in the park have decided that they might want to go with him. For fishing purposes he only wants to take out one other guy, so we may have to put up a sign up sheet. A lot of the guys are getting ready to head out but have already told him that they want to fish next fall when we get here. Works for me.

Apache Junction got almost an inch and a 1/4 of rain this week-end but the sun is shining today. Still chilly out there though.

We are headed out today. We are going to the Good Sam Rally over in west Phoenix at the racetrack. This afternoon we are going to Vee Quiva Casino where we’ll spend the night. That way we don’t have to fight all the rush hour traffic in the morning. We have four other couples who will be heading up from the Casa Grand area who will be joining us Wednesday morning. We’ll all go to the Rally together so we can park together.

We are going to be boondocking and the battery on my computer is shot, so I’m not sure how much posting I will be doing. I’ve also had the slowest internet connection later and I’ve had a lot of trouble commenting on blogs. But I am reading them when I can pull them up. Hopefully as people head north, that will ease the useage of the internet and I’ll have better connections.

When Jim’s not fishing I keep him busy with other projects. 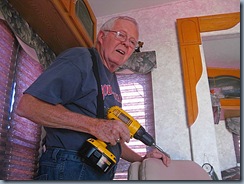 The girls got new toys. Scooter disappeared with hers. 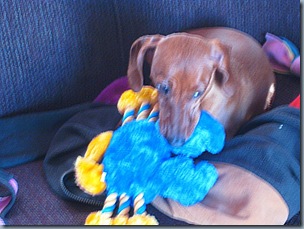