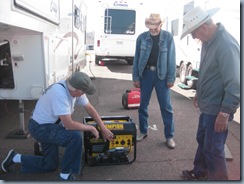 Jan and Bill had a battery problem when we arrived on Monday. The guys immediately set to work to find out what was draining their battery. Got the generator running to get them charged up and finally figured out it was a dead cell in the battery. Off to Costco for a new battery and all is well.

Jan and Bill bought the same generator we have and Jan is having more fun with that remote control switch than I ever did.

This is our first Good Sam National Rally. We attended a Samboree in Casa Grande in 2009 and vowed never to go again. No one would talk to us. We asked if we get sit with some of them at a meal and were told that the seats were saved. We went in to play bingo and when we sat down were told that those seats were taken. It was terrible. But we did meet Jan and Bill there which made it all worth while. 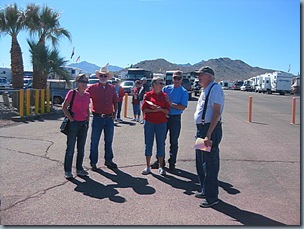 I wanted to try one of their big rallies to see what they are like. And the big difference this time is that we are with four other couples. Believe me, this makes a huge difference. Here we have Sherry, Dave, Jan, Bill and Jim waiting for the tram. 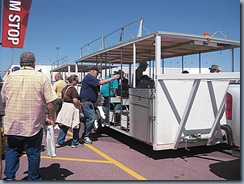 Now having said that, I make an effort to talk to lots of people. We’ve met several new folks who are parked around us and visit with people who have dogs or just smile. I really do try to make an effort because I know there are several people who are attending for the first time. 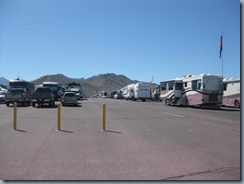 I am going to get Jim up on the roof to take some pictures to give you a better idea of how many rigs are here. They are selling pictures taken from the sky but they want $15 for them and I don’t want one that bad. Let’s just say there are lots of us. I’m still hoping they give us a count sometime. 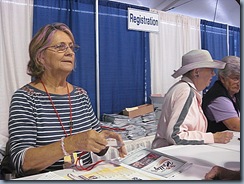 Registration went really quickly. Of course, we had all of our paperwork all filled out.

I haven’t been real impressed with the seminars being offered or the number of vendors that are here. I’ve talked to several people who have been to other Good Sam Rallies and they have told me that this one is much smaller and the number of vendors is way down. Not sure what the reason is. Might be because they are holding three Rallies this year across the country. With the price of fuel that does make sense.

As far as the seminars, I think it’s because we’ve been to several rallies and have been living the full time life style for almost four years that the majority of them are nothing new. I also found that many of the seminars at this rally are geared towards motorhomes and not fifth wheels.

The social aspect of the Rally has been great fun. It’s been wonderful to catch up with John and Karen, Polly and Vern, Sherry and Dave, and especially Jan and Bill. We are getting a lot of time to visit and catch up on what everybody is doing and where they are headed for the summer. 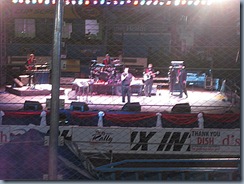 (Not a very good picture. We are a long ways away and there’s a fence in between us.) The entertainment tonight was Bowzer’s Rock and Roll Show and it was fantastic. You remember Bowzer from Sha Na Na, don’t you? He may be getting older but he can still hit those low notes without any problems.

He had four women on stage for a hula hoop contest and let me tell you, one of those gals could really keep the hoop going. Then he brought up four guys and they were good for laughter. A whole lot of fun going on.

These are just a few of my impressions and thoughts on the Rally. If any of you have any questions, just let me know.