Hey HoboJoe – yes Jim is a very, very lucky man to have found me. Just ask me I’ll tell you how lucky he is. LOL But to be completely honest – I’m the lucky one. For those of you are new to my blog, I was old (almost 38) when I found Jim (or did he find me?) and got married for my first and only time.  Marrying Jim was definitely the best and smartest thing I’ve ever done in my life. 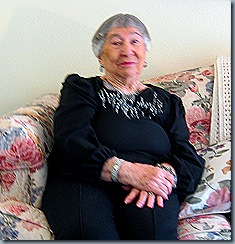 I have an aunt who lives in Mesa. Her name is Norma but we have always called her Aunt Happy. Her husband and my Dad are brothers, but she’s the only one that’s left. She just turned 98 in August and we wanted to pop in and surprise her because she doesn’t expect us until closer to Thanksgiving.

Well, let me tell you, popping in to surprise a 98 year old woman is not the thing to do. No, not because of her heart, but because she is NEVER home. We stopped Friday afternoon and she was out gallivanting with a friend who took her shopping. Saturday when we stopped by she had gone to a Memorial Service and then had gone to play cards with her friends. Finally on Sunday, we actually found her home. But the only reason she was home was because the front desk had told her someone was looking for her and she was hoping it was up. So she put her Sunday plans on hold so she’d be home.

This lady just cracks me up. She is so sharp. She told us how she met Uncle Don on a blind date and married him before he went off to war. She talked about dating men from the CCC camps. Then we went on to discuss the stock market. She knows all of the stocks she owns and follows them in the paper. Still loves to play the horses (the wooden ones they use at the Senior Living Complex) and dime bingo. Like I said, she is on the go most of the time.

She had made one concession to getting older. She has hired a girl to come in and stay with her at night. She fell last year and it scares her to think that she might fall again. But other than that she is going strong.

What a delight she is.