We were supposed to leave this morning to go up to Camp Verde. Ha Ha Ha. 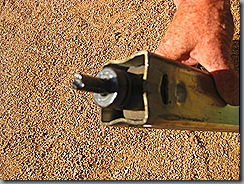 Jim got the truck hitched up and started to raise the jacks. The left front landing jack snapped off and there went our plans.

So instead of heading out we are frantically trying to find someone to help us get this fixed. We called one place here in Apache Junction and they said it would cost about $500, would take a week to get the jack in, and we’d probably have to leave our home with them. 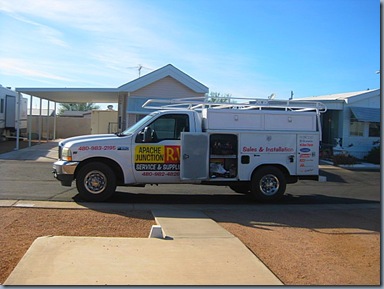 On to the next place. Talk about hitting the jackpot. Apache Junction RV Service and Supplies. I can’t say enough good things about these guys. Jim called and gave them the parts number on the jack but they weren’t sure what kind we had. So here comes Tom to check it out for us. He figured out which jack we needed and of course, it’s one they didn’t have in stock. He went back to the shop and started making phone calls. Found us the jack in a warehouse in Phoenix. 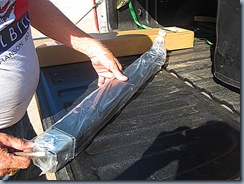 They didn’t have anyone available to go get it so Jim took off. After talking about the situation, we decided to go ahead and replace both jacks. When he got back with the jacks, he called Tom and back he comes. The new jack alignment tabs are just a tad too far apart so he calls the shop and has another guy run over his angle grinder. Grinds them down to the right length and gets them both installed. 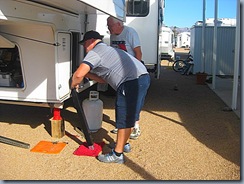 The price for all this - $415. Less than the other place wanted for one jack and we didn’t have to leave home. We definitely know who we’ll go to again if we need any work done.

So now, we’ll head up to Camp Verde in the morning.