He Is Not Here, but Is Risen

The Church of Jesus Christ of Latter-day Saints

At the beginning of His ministry, Jesus took a text from Isaiah: “The Spirit of the Lord God is upon me; because the Lord hath anointed me to preach good tidings unto the meek; he hath sent me to bind up the brokenhearted, to proclaim liberty to the captives, and the opening of the prison to them that are bound” (Isaiah 61:1; see also Luke 4:18)—a clear pronouncement of a divine plan to rescue the sons and daughters of God. But Jesus’s preaching in Galilee had been merely prelude. The Son of Man had always had a dread rendezvous to keep on a hill called Golgotha.

Arrested in the Garden of Gethsemane after the Last Supper, deserted by His disciples, spat upon, tried, and humiliated, Jesus staggered under His great cross toward Calvary. He progressed from triumph to betrayal, torture, and death on the cross.

At the last moment the Master could have turned back. But He did not. He passed beneath all things that He might save all things: the human race, the earth, and all the life that ever inhabited it.

No words in Christendom mean more to me than those spoken by the angel to the weeping Mary Magdalene and the other Mary as they approached the tomb to care for the body of their Lord: “Why seek ye the living among the dead? He is not here, but is risen” (Luke 24:5–6).

With this pronouncement, those who have lived and died, those who now live and one day will die, and those yet to be born and yet to die had just been rescued.

As the result of Christ’s victory over the grave, we shall all be resurrected. This is the redemption of the soul.

“Oh, sweet the joy this sentence gives: ‘I know that my Redeemer lives!’” Of this I testify. 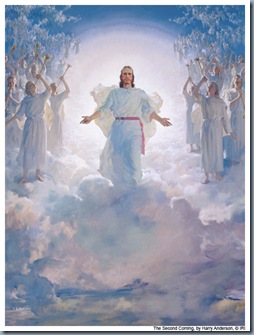 A joyous Easter to all mankind