TRAPPED IN OUR RV

First, we were trapped in the rest area. However,that was a great trap because we got to relax. Now we are trapped in our RV. Not such a relaxing time. 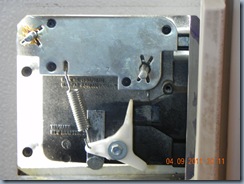 Jim went to take the girls out last night before we went to bed, and the door wouldn’t open. Nothing worked to get it to budge. He took off the inside plate of the locking mechanisms and tried everything. Still no good.

He then climbs out the bedroom window to see if he can have any luck from the outside. I know we’re supposed to practice escaping through this window but I figured we’d be practicing during day light hours, not at midnight.

He pounded and pushed and unscrewed, and screwed, and levered and banged until I was sure the neighbors were going to start complaining. Scooter was hysterical. She just totally freaked out from all the noise and that thing moving on the door. I was trying to help Jim from the inside but I finally had to take Scooter in the bedroom and try to calm her down. She was a mess. 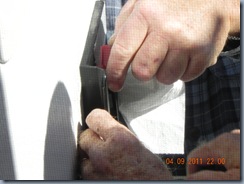 Jim finally gave up and crawled back in the window. We got some sleep but were back up at 6:30 this morning to try again. We pulled the jacks up to see if that would be enough to dislodge the door, but that didn’t work either.

Back out the window he goes. At least now he can see where he’s putting his feet. I hand him the dogs through the window so they can do their morning rituals. He works on the door, again with no luck.

We finally called Coach Net. They were really nice and the woman I talked to said this was the second time she had somebody trapped in their RV. They are sending out a locksmith who hopefully can get us out of here. Not sure if we’re going to make it to Death Valley today or not. 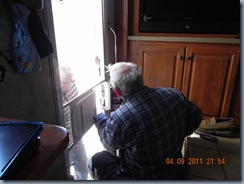 The locksmith finally showed up. He had to climb in our bedroom window so he could work on the lock from the inside. Between the two of them,the guys finally got the door open in about 15 minutes. 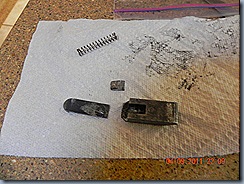 See these three pieces? They are supposed to be one piece. I’m sure a lot of you out there will know how this all works and so does Jim.  All I know is this is the piece of metal that caused us to be trapped in our RV.

We can close our door and keep it shut with the dead bolt. When we return to civilization we’ll have the lock replaced on the door and get Jim a new screwdriver. The screwdriver broke while trying to pry the door open. I also didn’t get a picture of Jim climbing in or out of the window. He really wasn’t in the mood.

We aren’t going to make it to Death Valley today. We’ll head that way first thing in the morning.