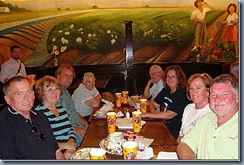 We met up with Jeri and Terry, Eric and Karla, and Jerry and Janice at Joe’s Barbeque in Gilbert, AZ. Great food with great friends. 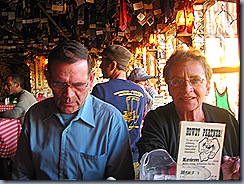 On the Tuesday after Christmas we got a call from our friends Bill and Carol from Billings. They had driven down to Scottsdale to deliver a car to the owner of the dealership where Jim worked. We drove up to Scottsdale and took them out to dinner at Pinnacle Peak Patio. 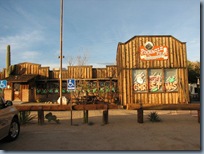 “Pinnacle Peak Patio is renowned for its delicious mesquite broiled steaks, casual western atmosphere, and its "NO NECKTIE POLICY." This "no necktie" tradition was started one night when a Phoenix executive came in for dinner. The original owner, wanting to keep the atmosphere in his restaurant casual, told the executive, "Either you take that tie off, or I'll cut it off." The executive did not take heed and was appalled when the owner pulled out a butcher knife and promptly cut off the offending cravat. 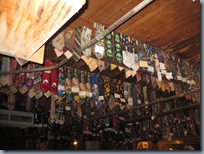 Wanting to be recognized as a victim of this absurd policy, the executive demanded that his tie be prominently displayed for all to see. The necktie was stapled to the rafters along with a business card identifying its victim. Pinnacle Peak is very serious about its "no necktie" policy and over the past 48 years has cut over a million ties from unsuspecting customers.”

Their restrooms are also a little different than the norm. 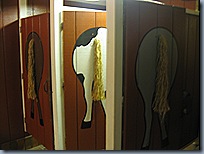 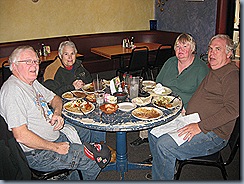 On Wednesday we headed down to Florence, AZ to meet up with Toni and Doug for Mexican food. They had never been to a Mexican restaurant and I sure am glad they picked a really good one. The L&N Inn.

After having lunch we went across the street to the Pinal County Historical Museum. 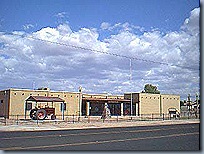 There are exhibits of 125 varieties of barbed wire, early doctor's instruments, a large bullet collection, and saguaro cactus furniture. Western film star, Tom Mix, was killed in an automobile accident south of Florence in 1940 when his metal suitcases fell on him.

There is an exhibit of early-day equipment used in executions at the Arizona State Prison in Florence. Included are the door to the gas chamber, the chair in which the condemned sat, hanging nooses and photos of the hanged as well as invitations to the hangings. 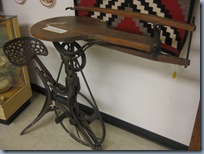 This is a foot pedaled jigsaw. A really great museum.