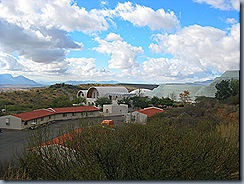 On Monday morning, Jeri and Terry and Jim and I headed out to take a tour of Biosphere2. Jeri was driving and it still took us almost an hour to get there because of traffic and traffic lights. We knew we had to be back by 1:00 to meet up with Toni and Doug for lunch so we were on a tight schedule.

We finally got to Biosphere and then we found out that the next tour wasn’t until 11:00 and to do the entire tour takes about 3 1/2 hours. There is also a great deal of walking and climbing stairs and of the four of us, Jeri is the only one who was in good enough shape to do that. We would also have the honor of paying them $20 to do this. 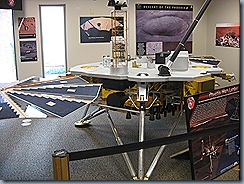 We watched their movie explaining what they were doing at Biosphere2 and how they were trying to accomplish their goal. Took a couple of pictures and then decided we were going to pass on the tour.

I didn’t understand a lot of what was being explained but it was interesting.

Biosphere2 derives from the idea that it is modeled on Earth, the first biosphere. I remember in the early 1990’s when several scientists were sealed inside the glass enclosure for two years to determine how well they could survive in this environment. They no longer seal people inside the building but continue to perform numerous experiments to determine how to protect our precious water source.

We made it back in time to walk the girls before we met up with Toni and Doug for lunch. They were on their way to Casa Grande and we found a truck stop that was an easy on and off the interstate.